The Next Generation: Young Elected Officials and their Impact on American Politics 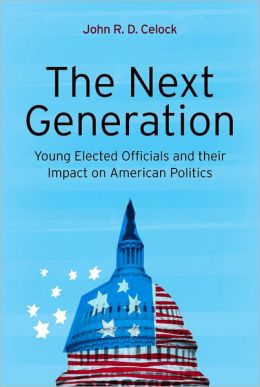 John is the author of  The Next Generation: Young Elected Officials and their Impact on American Politics which was published by Continuum International Publishing in December 2010. In the book, John explored why do those under 35 run for elective office, what challenges do they face and how does their age impact their views on public policy. John interviewed over 90 current and former young elected officials from across the country about their experiences to put together the first comprehensive look at why those under 35 run for elective office.

John is currently working on two new book projects. One focuses on developments at state governments across the country in recent years, while the other is a collaborative project with a political figure. Check back for updates.

What They’re Saying About The Next Generation: Young Elected Officials and Their Impact on American Politics.

“John Celock combines the story-telling abilities of a journalist with the systematic approach of a political scientist to produce an engaging and richly textured book of unusual depth and quality. Celock takes us with him as he crisscrosses the nation conducting extensive interviews aimed at understanding the political trajectories of young elected officials. His approach to the subject is simultaneously entertaining and systematic while relating the rich political context that surrounds each of the remarkable individuals he profiles. The Next Generation convincingly makes the argument that “next generation” politicians are bringing fresh ideas to our local, state and national politics and changing the political landscape.

The Next Generation is ideal for undergraduate courses on state and local politics or the electoral process. Students reading the book will be impressed with the many examples of how ordinary Americans, many just about their age, are taking chances and making a difference in their communities and the nation. Celock’s conversational writing style will appeal to students and general readers alike. The Next Generation is also highly recommended for general readers who are interested in politics and elections.” – Sean Q. Kelly – Professor of Political Science, California State University Channel Islands

“Sometimes it takes youth to write about youth, and that is obviously true in this new work by political journalist, John Celock. “The Next Generation” tells the remarkable stories of numerous politicians in their teens, twenties and early thirties, as they transform their idealism into effective political leadership. A welcome addition in a field that has treated young politicians as anomalies rather than a larger field of political leaders than we once may have realized.” – Rev. Dennis H. Holtschneider, CM, President, DePaul University

Among Those Interviewed For The Next Generation: Young Elected Officials and Their Impact on American Politics

(The officials listed below were interviewed for the book and do not necessarily endorse the book or www.johncelock.com.)