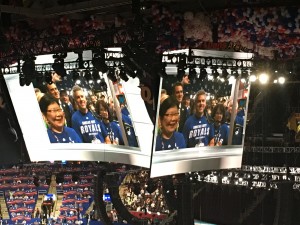 An 18-year-old Savannah, Ga. student is the second youngest delegate to this year’s Republican National Convention and is hopeful that it is the first stop on what he sees as a long political career.

Will Carter, an incoming freshman at Mercer University in Macon, Ga., decided to step up and seek a convention spot after following this year’s Republican race and being supportive of first Texas Sen. Ted Cruz and then Republican nominee Donald Trump. Carter, a recent graduate of Benedictine Military Academy in Savannah, told The Celock Report that he has so far enjoyed his time in Cleveland.

“I’ve loved it. It has been so exciting,” Carter said. “Meeting so many celebrities and people. I am awestruck in many ways. Being 18 and being at the convention is nothing short of amazing in my view.”

Carter is not the youngest delegate among the Republicans gathered along Lake Erie, with that honor going to Jack Salm, a 17-year-old from Virginia.

Carter said that he has been following Trump’s campaign from the beginning and while first supportive of Cruz, he began to see Trump as the best candidate. Attending his local Republican convention, Carter said he wanted to see if he could put his foot in the door and become a delegate. He defeated a former congressional candidate by 12 votes to gain his trip to Cleveland.

Carter said that Trump’s position as a political outsider is one of the things that attracted him to the New York real estate developer’s campaign. He said that he believes Trump is best positioned to deliver change to the country.

“He is the change that I wanted to see in the world. He is an outsider that is getting involved in politics. He is not afraid to offer change,” Carter said. “He is not letting the media control him. He is a passionate man and he believes in what he is doing. He has never stopped moving forward.”

“I think Melania Trump’s speech was fantastic,” he said. “It was one of the best speeches I have ever heard her give and it really showed her care for the nation.”

Heading into the final stretch of the convention, he noted he is looking forward to Trump’s speech, along with speeches from former House Speaker Newt Gingrich and GOP vice presidential nominee Indiana Gov. Mike Pence.

Carter, who plans on double majoring in law/public policy and psychology in college, told The Celock Report that he is interested in seeking public office one day. He noted that he had explored running for city council in Savannah this year, but the minimum age to run was 21. He said that once he turns 21 he intends to seek elective office. He noted a long-term career goal of running for president himself one day.

Until then, Carter said he is enjoying the entire convention.

“The convention is history in the making,” he said. “To be 18 and to be here is the most exciting part.”