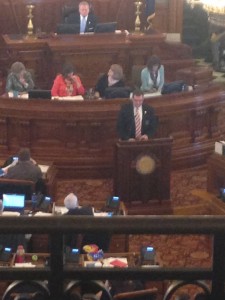 Rep. Travis Couture-Lovelady carrying the constitutional carry bill on the floor of the Kansas House of Representatives earlier this year. Photo courtesy of Heath Kohl.

A member of the Kansas House Republican leadership has announced that he is leaving the Legislature to accept a position with the National Rifle Association.

Rep. Travis Couture-Lovelady (R-Ellis) announced Sunday that he is leaving the Legislature effective immediately to accept a position lobbying state governments for the NRA, starting this week. Couture-Lovelady, the House majority caucus chairman, is a second term lawmaker who is known for his work on Second Amendment issues including pushing for the state’s new law to allow for permit less concealed carry in the state, a law known as constitutional carry.

“Having spent the past few years turning Kansas from a state that was among the last to pass conceal carry to a state that is among the first to guarantee our rights with constitutional carry, I have the opportunity to take the Kansas model and spread our model effectively to other states,” he said. “As the federal government continues to encroach on our daily lives, it is in the states where real progress is happening despite the gridlock and overreach in Washington, D.C.”

Since the beginning of 2014, Couture-Lovelady has served as vice chairman of the House Federal and State Affairs Committee, which has jurisdiction over gun issues. Couture-Lovelady has served on the panel since joining the Legislature in 2013. He also currently serves on the House Commerce, Labor and Economic Development, House Rules and Journal and Judiciary Committees. He is a former member of the House Taxation Committee and currently serves as chairman of the legislative Western Kansas Caucus.

Earlier this year, Couture-Lovelady played an effort in authoring parts of the state’s welfare reform law, including an amendment that limited where state welfare funds could be used. Among the limitations were prohibiting the use of the funds for tattoos, body piercings, strip clubs and vacations. He also pushed amendments requiring a photo identification on welfare benefit cards and that TANF recipients who have a previous drug conviction to enroll in a drug treatment program in order to receive funds.

Couture-Lovelady is not the first Kansas House member to step down midterm to lobby. In December 2009, then Rep. Jason Watkins (R-Wichita) stepped down in order to become a lobbyist for the Wichita Metro Chamber of Commerce. Other lawmakers have moved into the lobbying world as their terms wound down, including former Rep. Sean Gatewood (D-Topeka), who served as executive director of the Kansas Health Consumer Coalition, which promoted Medicaid expansion issues. Gatewood, who was defeated in his bid for a third term in 2012, left the Legislature several weeks before his term expired to accept the KHCC post.

Couture-Lovelady’s successor will be picked prior to the start of the annual legislative session in January by Republican committee members in the 110th district. House Republicans will meet to elect his successor as caucus chairman, while House Speaker Ray Merrick (R-Stilwell) will pick his successor as vice chairman of the Federal and State Affairs Committee.

“It has been an honor and a privilege to serve the people of the 110th District,” he said. “I am truly blessed to have had the opportunity to make a difference in the lives of so many people, including the friends and family I grew up with.”