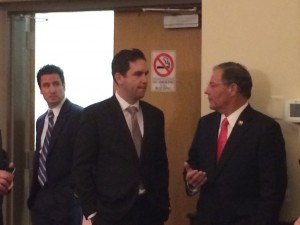 The mayor of New Jersey’s second largest city Wednesday pulled the plug on a long anticipated run for governor, shaking up the race to lead the Garden State.

Jersey City Mayor Steve Fulop (D) used a Wednesday afternoon press conference in front of City Hall to announce that he would not seek the governorship and was endorsing Phil Murphy, a former Goldman Sachs executive and ambassador, for the Democratic nomination. The move comes after Fulop has spent the last three years traveling the state and positioning himself to make a 2017 race for the governor’s mansion.

Fulop used the announcement to shoot down speculation that the decision had to do with his potential testimony in the Bridgegate trial. Fulop had interactions with then Port Authority executives David Wildstein and Bill Baroni in 2013 regarding a private client who had financial issues with the Port Authority. Wildstein, the prosecution’s star witness in the trial regarding the closure of lanes on the George Washington Bridge, has said that Port officials used the contract as leverage to attempt to get Fulop, then a Jersey City councilman, to endorse Gov. Chris Christie (R) for reelection. Fulop also found himself tied into the endorsement issues when, as a newly elected mayor, he endorsed 2013 Democratic gubernatorial nominee Barbara Buono, and found promises canceled by the Christie Administration. Baroni and former Christie deputy chief of staff Bridget Anne Kelly are currently on federal trial for their alleged rules in Bridgegate

Fulop said Wednesday that the evidence is showing that he was wronged by the Port Authority and Christie’s office and that he would turn over emails to the media after the conclusion of the trial. Fulop has already turned the emails over to federal prosecutors.

“It is very clear from the prosecution’s opening arguments that I was mistreated,” Fulop said.

Fulop also shot down online rumors that the decision not to seek the governorship has to do with his health, legal issues or his wife. He said the decision rests solely with wanting to unite the Democratic Party behind Murphy, who is expected to face off against state Senate President Steve Sweeney in the June Democratic primary. Fulop said that Murphy, who was ambassador to Germany in the first Obama term, “shares progressive values” for the state.

Fulop said he plans to seek a second term as mayor in 2017.

“I hope to convince the voters and the leaders of our party that I am that leader,” Murphy said.

Fulop has been seemingly positioning himself to make a 2017 gubernatorial race since he was elected mayor in a nonpartisan May 2013 election, defeating then Mayor Jeremiah Healy (D). Fulop, then a two term councilman, overcame Healy’s backing from entrenched Democratic Party interests and support from President Barack Obama, to easily capture City Hall and setting himself up as a leader in New Jersey Democratic politics.

Fulop has been a frequent presence around the state since he became mayor, attending events in all corners of the state and seeking to build relationships with other Democratic leaders. He formed a close partnership with Newark Mayor Ras Baraka (D), including helping Baraka win the mayor’s office in 2014. Fulop also formed relationships with others urban leaders in the state, hoping to translate that support into a gubernatorial bid.

“I have thought about it and I spent a lot of time building relationships elsewhere,” Fulop said Wednesday.

Fulop ran into statewide difficulties when he had a public battle with South Jersey Democratic leader George Norcross over casinos in North Jersey, a battle that was costing him support in northern New Jersey. Norcross is expected to back Sweeney for governor. Fulop also saw potential supporters in Bergen County swinging towards Murphy.

Fulop’s endorsement returns the 39-year-old Marine veteran back to his roots in the financial services industry. Fulop was a young trader at Goldman Sachs when he first enlisted in the Marines in 2001 and fought in Iraq in 2003. He combined a career at Goldman Sachs and other Wall Street firms with much of his service as a councilman representing Jersey City’s waterfront.

Fulop first burst on the political scene when he was recruited by then Jersey City Mayor Glenn Cunningham (D) to make a quixotic challenge to then U.S. Rep. Bob Menendez in a 2004 Democratic congressional primary. Menendez, now a U.S. senator, easily defeated Fulop, who came back to beat machine Democrats for a city council seat in 2005. Fulop made a name for himself during his eight years on the city council for ethics reform issues in Jersey City.

Fulop had passed on an anticipated 2009 race for mayor and instead focused on a 2013 race. His second term as a councilman, showed Fulop working more outside of his waterfront base and expanding his reach into other wards and into school board races. His election as mayor pushed Fulop, who had been known as a moderate, into a more progressive slant as he sought to form alliances with those outside in the city, including the teacher’s union, which had viewed him skeptically based on his previous strong support for charter schools.

Murphy has been staking out a progressive slant in his bid for governor, including calling for new investments in higher education and the creation of a state owned bank patterned after the Bank of North Dakota, the nation’s only state owned bank. Murphy has also been seeking to distance himself from former Gov. Jon Corzine (D), another Goldman Sachs alum turned progressive politician, who was defeated by Christie in 2009.

Sweeney and Murphy are not the only candidates potentially seeking the governorship next year on the Democratic side. State Sen. Ray Lesniak (D-Elizabeth) has indicated that he is planning a run and a super PAC supporting Lesniak was promoting the longtime lawmaker at a street fair in Westfield on Sunday. Assemblyman John Wisniewski (D-Sayreville), who co-chaired the Bridgegate Committee, is also exploring a run. Former state Democratic Party Chairman Tom Byrne, the son of former Gov. Brendan Byrne (D), has indicated he would consider a race.

On the Republican side, Lt. Gov. Kim Guadagno is considered the frontrunner and Assemblyman Jack Ciattarelli from Somerset County is also considering the race. Guadagno, a former federal prosecutor and Monmouth County sheriff, has been serving as the state’s acting governor during Christie’s regular absences, and has been consolidating support among the term-limited governor’s allies. Guadagno has regularly attended local GOP events around the state since taking office in 2010.

Fulop stressed that he was hoping to unite Democrats around Murphy.

“The hope today is to unite the people in a common cause,” Fulop said.