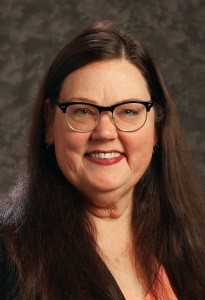 A freshman Democratic state legislator in Kansas was found dead in her hotel room Wednesday.

Terrell had been posting on social media Tuesday night and Wednesday morning about the Legislature’s vote Tuesday to override Gov. Sam Brownback’s (R) veto of a bill repealing the state’s 2012 tax cuts. Terrell had been a key advocate of changing the state’s tax policy to repeal the 2012 cuts, which have contributed to the state’s ongoing budget deficit. She also advocated for increased funding for education in the state.

“I’m going to go to Topeka and I’m going to show up for work everyday just like you do,” Terrell said in a March 2016 video introducing her candidacy. “I am going to be there to be a good strong voice for what we need right here at home, in our district, in our neighborhood, for our schools. We need to move in a new direction with fresh ideas.”

Terrell had been a key figure in the Legislature’s bipartisan women’s caucus, which was focused on developing a bipartisan tax bill in recent days. Terrell had worked to facilitate the caucus’ discussion on tax policy.

“It was my honor to make this vote on behalf of my constituents – hard working people who deserve a system that works FOR them,” Terrell tweeted at 1:08 a.m. Wednesday morning.

It was my honor to make this vote on behalf of my constituents – hard working people who deserve a system that works FOR them.

You're waking up in a Kansas where the Brownback experiment has ended. Good morning! #ksleg

Terrell was elected to the state House of Representatives last year, defeating former Rep. Jan Pauls (R-Hutchinson). Terrell’s victory was seen as a key moment for progressives in Kansas, who had long worked to oust Pauls, who had been a conservative pro-life and anti-gay Democrat prior to her 2014 conversion to the GOP. Pauls had a history of defeating progressives challengers prior to Terrell defeating her.

An alumnus of the University of Kentucky, Terrell first came to Kansas in 1984 for a radio job and settled in Hutchinson, the Hutchinson News reported following her 2016 victory. She worked in writing and communications in addition to her work in the Legislature. She was the author of Cook’s Library with Patsy, a blog and website focused on cooking and recipes.

Terrell’s shocked colleagues are paying tribute to her on social media.

My condolences to the family, friends, and colleagues of Rep. Terrell after her sudden passing today. She will be missed. #ksleg

I lost a friend today. She was kind & generous. She loved representing the 102nd & loved serving in #KSLeg @patsyterrell, you'll be missed.

Patsy was a strong legislator who was firm in her convictions, listened to others, and is a true example of what it means to govern. #ksleg

Kansas lost a passionate and dedicated leader today. Rep. Patsy Terrell worked hard to represent her community. She will be missed. #ksleg

We are heartbroken over the loss of our friend. KS is a better place for her service. Her empty seat will be tough to face. #ksleg https://t.co/QwoaYyvAVD

Patsy is a wonderful person with a glowing personality who will be sorely missed. A gracious and caring person, regardless politics. #ksleg

My heart is with Rep. Terrell's family & friends tonight as they mourn her passing. I grieve with her #ksleg friends over this tragic loss.

Just yesterday we were talking & laughing about her pin collection, vintage hats, & the cat that used to push her out of bed RIP PT #ksleg

Absolutely heartbroken by the sudden passing of Rep Terrell. She was such a positive, great person. The #ksleg is blessed to have known her.

RIP Rep Patsy Terrell. Thank you for your service and for being a genuinely good person. #ksleg

Very sad news on the passing of Rep. Terrell. She was a persistent, hard working legislator for Ks workers.She will be missed. RIP #ksleg

We send our sincere condolences to the Hutchison community. Sad news of #ksleg Rep. Terrell's untimely passing; enjoyed working with her. pic.twitter.com/bWTfobnWbz

I'm saddened to learn of the death of Kansas Representative @patsyterrell. She served the state she loved. Prayers for her family. #ksleg