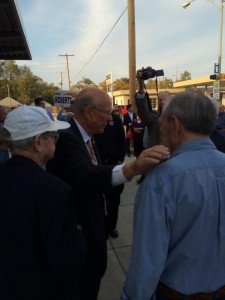 Roberts used his speech to the over 60 supporters jammed into a room in a community center here that the “road to a Republican” Senate is running through Kansas. Much of Roberts speech stuck to points he has been raising in debates and other events in his bid for a fourth term. Roberts is locked in a competitive race with independent Greg Orman. A poll released Thursday by Rasmussen shows Orman narrowly leading Roberts.

Roberts told the cheering crowd that voting for Orman would be a vote for a Democratic Senate and helping President Barack Obama. Roberts has worked to tie Orman to Obama and Senate Majority Leader Harry Reid (D-Nev.) during the campaign, citing Orman’s past Democratic donations and support from Democrats. Orman has not indicated who he will caucus with in the Senate but has said he would not vote for either Reid or Minority Leader Mitch McConnell (R-Ky.) for majority leader.

Democrats are not fielding a candidate in the race after Democratic nominee Chad Taylor dropped out last month. The event attracted attention from Japanese media, part of the growing national attention on the race.

Roberts attacked Orman for a fundraiser held for him by liberal activist Jonathan Soros and other Democratic donors in New York City earlier this month. He also attacked Orman for receiving support from former New York City Mayor Mike Bloomberg. Bloomberg, a Democrat turned Republican turned independent, is unpopular in rural America due in part to his vocal support for gun control.

Roberts also attacked Obama during the speech, citing that he is needed in the Senate to block Obama’s attacks on the aviation industry, a large part of the Wichita economy, along with noting that he wants to block another Obama move. He said that if he is reelected and Obama were to make a proposal to move terrorists housed at Guantanamo Bay, Cuba to Fort Leavenworth in Kansas he would tell Obama, “not on my watch.”

Obama, the son and grandson of Kansas natives, is deeply unpopular in the Sunflower State.