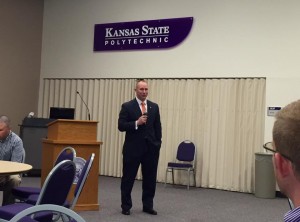 Six decades after President Dwight Eisenhower signed legislation creating the interstate highway system, his great-grandson is looking to make his mark on another area of transportation.

“There is tremendous amount of economic growth and development here,” Atwater told The Celock Report. “Overall we want to maintain that and keep our eyes out for future investment and growth opportunities.”

Atwater has spent his first weeks on the job traveling around Kansas meeting with aviation industry leaders and touring airports and research facilities. He said with aviation being an over $13 billion a year industry in the state, he wants to make sure that the industry continues to grow. Atwater comes to the job with a history in the business community, including stints at companies focused on innovation, transportation and agrifuel.

A top priority for Atwater is the protection of the aviation sector in Wichita, long a top hub for the industry nationally. With job losses in recent years, Atwater said that he is focused on getting out word nationally about the talent available in Wichita and the need for aviation companies to create jobs in the city.

“The important thing is that Wichita is there and has that rich history in aviation,” he said. “People around the country understand that. It is important that Wichita maintains those engineers.”

Among the areas Atwater plans on focusing on is obtaining more KDOT funding for airport improvements around the state, along with making sure that the FAA is working with local airport officials on issues facing the airports.

In addition, Atwater noted that the development of new commercial routes to several airports, including those in Topeka and Salina are helping to grow the economy in those communities.

Atwater said the development of the unmanned aerial systems industry is a top priority for him. Earlier this year, state lawmakers and KDOT created a new deputy director position within KDOT Aviation focused on the UAS industry. Atwater has been focused on recruiting for the position in recent weeks. The position is geared towards promoting and growing the UAS industry in the state, along with working with UAS researchers at Kansas State Polytechnic University in Salina and other universities statewide on industry growth.

“That industry is very important to the state,” Atwater said. “We want to develop that industry.”

Among Atwater’s trips in his first six weeks was a tour of the KState Poly UAS facilities in Salina, which has been a hub for the industry. Part of the growth strategy within UAS has been focused on partnerships between colleges and the private sector in the industry. Atwater said that a priority for him is to work with colleges and with the private sector on UAS growth, noting that “top notch research at our universities.”

With UAS industries developing in other states, including in Oklahoma and North Dakota, Atwater said that he believes Kansas is in the best position to grow the industry.

“Look at places like Salina and Wichita that expertise is there,” he said. “Some of the greatest minds in the industry are sitting here in Kansas. It is important to maintain those relationships.”

“I’m looking forward to working with our partners at KDOT Aviation to advance the UAS industry in Salina and Kansas,” Claeys said.

Atwater stressed that economic development through aviation is his top priority statewide. He noted that many industries in the state are interrelated to aviation and that he wants to make sure his agency can help with the economic growth. He said that state officials need to be “ready to embrace new things” within the aviation industry and adjust policies in order to adapt to the changes. He said this would help grow the state’s aviation sector.

“We want to make sure that everyone understands that Kansas is open for business in terms of aviation,” Atwater said.