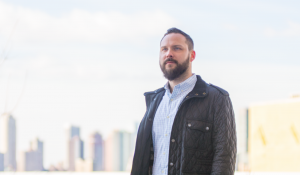 One of New Jersey’s most Democratic legislative districts has a surprisingly competitive general election, as the Republican candidate runs a stronger than expected race.

Republican Matthew Kopko, a 29-year-old attorney from Bayonne, has been running a competitive race in the 31st district and getting notice in a district that most Republicans shy away from. The race comes amid upheaval in the district, with both incumbent Democrats not getting party backing to run again, and two new Democrats seeking to take their turn in Trenton.

“A lot of people out here need a lot of help and legislators have a lot of influence,” Kopko told The Celock Report about his run to represent Bayonne and parts of Jersey City. “They keep running the same old corrupt people here. There is no legitimate two party system.”

Kopko is facing off against Democrats Nicholas Chiaravalloti and Angela McKnight for the seats being vacated by Assemblymen Jason O’Donnell (D-Bayonne) and Charles Mainor (D-Jersey City). Keeping with 31st district and Hudson County Democratic Party tradition, Chiaravalloti is the pick of Bayonne Mayor Jimmy Davis (D) and McKnight is the pick of Jersey City Mayor Steve Fulop (D).

In the last 15 years, the Assembly seats in the 31st district have become something of a prize that the mayors of the two cities can award to the party faithful and close allies. O’Donnell lost party support after Davis unseated former Bayonne Mayor Mark Smith (D) last year. O’Donnell had been Smith’s campaign manager and public safety director, while Chiaravalloti, a former aide to U.S. Sen. Bob Menendez (D-N.J), was close to Davis. The Smith loss was O’Donnell’s second large political blow in as many years, following many state Democrats uniting against him being named state Democratic Party chairman by 2013 gubernatorial nominee Barbara Buono that year.

Mainor was dropped from the ticket as Fulop, elected mayor in 2013, sought an ally for the seat. Fulop originally backed Denise Ridley but Ridley withdrew after state Sen. Sandra Cunningham (D-Jersey City), who also represents the 31st district, did not back her. Fulop and Cunningham both were willing to back McKnight, a nonprofit leader.

Mainor had threatened to run a primary campaign to retain his seat, against what had been a reported deal to award the retired police officer with a job as a county undersheriff in exchange for leaving Trenton. Mainor had said that he believed that Cunningham’s late husband, former Jersey City Mayor Glenn Cunningham, would have wanted him to run. Mainor had headed Cunningham’s mayoral security detail.

The legislative musical chairs in the district is one of the things that Kopko says inspired him to run. He said that he wants to give voters a choice in the contest; something he says is missing in the current environment. He said the work of the Democratic Party with regards to lawmakers is “either play our game or we’ll kick you out.”

“Part of why I am running is this system of a bunch of protected political bosses or political officials choosing who can be in the Legislature and kicking people out who didn’t serve their needs because they can,” Kopko said.

Kopko is making a push against Chiaravalloti in what is seen as the Bayonne seat. His platform is based on ethics reform, education, crime and economic issues. Kopko said that he wants to study making the state Legislature full time, noting that too many lawmakers hold jobs as attorneys and business executives that interrelate with their state duties. He noted that Chiaravalloti is an attorney with the politically connected law firm of Weiner Lesniak, which is run by state Sen. Ray Lesniak (D-Elizabeth).

Chiaravalloti did not return a message left for comment with his spokesman.

“We don’t need an entire layer of government with a bureaucracy and tax dollars to figure out how municipalities can work together,” Kopko said.

Kopko’s ethics push is reminiscent of Fulop’s push for ethics reform when he was first elected as a city councilman in 2005. Fulop made ethics reform his top issue during his eight years on the city council. Kopko was quick to brush away any comparison to Fulop, but said that he does not believe Fulop has fulfilled his original promises, noting that he has not been “embraced by (Fulop’s) machine.”

Kopko said that he believes Fulop, a likely 2017 gubernatorial candidate, is good at selling and the voters want more than promises.

“Steve is a trader by trade and his life is putting things together to sell. I am not looking for a lifetime of career in politics,” Kopko said. “Part of why I am running is I have gotten the same promises and I am sick of it.”

Kopko said he wants to address education, crime and job creation, saying he believes the three issues are intertwined and would benefit his district. Among the education issues he is focused on is increased technology in the schools, whistleblower protection for parents, increased parental involvement and an analytical approach to school management.

Assembly Minority Leader Jon Bramnick (R-Westfield) who has been focused on several competitive races in South Jersey and Bergen County told The Celock Report that he has talked with Kopko on several occasions about his race. He described the Republican as “an attractive, smart and impressive candidate.”

Bramnick said he was not surprised about how Kopko is making a run in a district that is normally a Democratic stronghold.

“In politics I am never surprised about anything,” Bramnick said. “It is always good to challenge incumbents in areas that are historically Democratic. In terms of surprising it is hard to surprise me on anything.”

Kopko said that he remains confident that he can win in a county that has not sent a Republican to the state Assembly since 1985, when then Gov. Tom Kean (R), won reelection in a landslide and swept Republicans into office in several Democratic strongholds. The 1985 Republicans were unseated two years later. He said believes he is gaining grassroots support including from Democrats not associated with the county party. He also noted that Democrats should feel comfortable with him since he would be an easier lawmaker to unseat if they grow dissatisfied.

“You can be courageous and you can speak you mind,” he said. “This is 2015 where the First Amendment should still matter.”