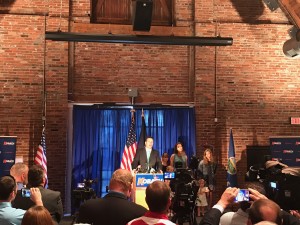 Kansas Secretary of State Kris Kobach (R) has kicked off his bid to be the state’s next governor, railing against illegal immigration, taxes and the culture in state government.

Kobach, who made the announcement Thursday in in the Kansas City suburb of Lenexa, is viewed as the frontrunner in early polls, as the state begins to focus on the 2018 gubernatorial contest. Kobach outlined a conservative platform, including his signature issue of illegal immigration, during the rally. He is the third Republican candidate to join the growing field to succeed term-limited Gov. Sam Brownback (R).

“Topeka is facing a crisis of leadership,” Kobach said.

Kobach spent much of his speech attacking the current leadership in Topeka, including Democrats and moderate Republicans in the state Legislature. He said that he is against the $1.8 billion tax hike bill that the Legislature passed into law Tuesday, overriding Brownback’s veto. The bill overturns many of the tax cuts that Brownback signed into law in 2012.

Kobach said that the tax bill came at “absolutely the wrong time” in state history and repeated a common conservative theme in Kansas politics that the state “has a spending problem.” The tax bill was pressed by Democrats and moderate Republicans for years to address the budget deficits the state has seen in recent years. While tax bill supporters said the 2012 tax cuts contributed to the deficit, conservatives have pressed that the state should cut spending and that downturns in the agriculture and energy sectors have contributed to the deficits.

Kobach said that he has been able to cut his budget in the secretary of state’s office since 2011 from $7 million to $4.7 million, mainly through attrition and employing more technology in the office. He said that he wants to see that done throughout state government. He said he made the cuts as the office took on the duty of being the state’s voter fraud prosecutor.

He also attacked the size of government in the state.

“Kansas government is bloated. If you take state and local government combined, Kansas has the third highest amount of government employees per capita in the country,” he said. “We’re not New York, we’re not California, we’re not Illinois.”

Kobach said that he would make illegal immigration a main focus of his in the governor’s office. The issue has made Kobach a lightening rod for progressives nationally, as he has authored controversial immigration laws in Arizona, Alabama and Missouri. Kobach has also served as an advisor to President Trump on immigration issues, a post that he described as an “honor.” Kobach also is vice chairman of a Trump task force on voter fraud issues, a signature issue of his in the secretary of state’s office.

“We have no efforts to stop illegal immigration,” Kobach said of the state. “Kansas is the sanctuary state of the Midwest.”

He called for a law banning illegal immigrants from receiving in-state tuition at state colleges, along with having state and local law enforcement work with federal immigration officials. Kobach blamed illegal immigrants for taking jobs and depressing wages in industries.

Kobach said that he would force the state Legislature to stay in session until the immigration bills he wants pass.

“I think there is enough talent in this state for the current leadership in Topeka to cycle out and a younger generation can come in,” he said.

Kobach took specific aim at Senate Minority Leader Anthony Hensley (D-Topeka) who was first elected to the state House of Representatives in 1974 and has served as a lawmaker since. He noted that Hensley’s tenure started while Gerald Ford was president and Kobach was eight years old.

“I think it’s time to retire,” Kobach said of Hensley.

Kobach has been viewed as the frontrunner on the GOP side, partially attributed to his high name recognition in a field that has been largely campaigning outside the spotlight.

Kobach, a former state Republican Party chairman, was first elected secretary of state in 2010, when he defeated Democratic incumbent Chris Biggs 59 percent to 37 percent. Kobach had won a three way GOP primary in 2010 with 51 percent of the vote. In 2014, Kobach defeated Democrat Jean Schodorf 59 percent to 41 percent.

Kobach’s announcement was immediately criticized by the state Democratic Party, who called him a continuation of Brownback.

“By nominating Kris Kobach for governor, the Republican Party would continue to endorse the failures of Sam Brownback,” state Democratic Party Chairman John Gibson said in a statement. “Whoever our colleagues on the other side of the aisle choose as their standard bearer, we look forward to a vigorous debate about the direction of our state.”

Kobach said Thursday that he believes he can lead the state.

“We are Kansans and we know we can turn this ship around. It is time for Kansas lead again and it is time to do the job that needs to be done,” he said.