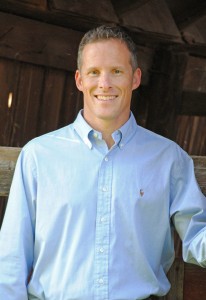 A Kansas state legislator who was a contestant on “American Ninja Warrior” has kicked off his campaign for an open congressional seat.

State Rep. Kevin Jones (R-Wellsville) announced Wednesday that he was entering the race to succeed retiring U.S. Rep. Lynn Jenkins (R) in the state’s second district. Jones, a Green Beret who fought in Iraq, outlined a platform of fighting for regulatory reform and lowering the national debt as a member of Congress.

“With all of that you can see how over regulation, you can see how different things from the federal level they impact everywhere, the school board and the state house,” Jones told The Celock Report.

Jones said that from his perch in the state Legislature and from his seat on the school board in Wellsville, he has seen federal regulations and laws that are harming state and local government. Among the ones he pointed to were the impact of federal testing requirements and Obamacare on the local school budget.

Jones said that he and his school board colleagues have been grappling with a $100,000 rise in health insurance costs for school district employees, which he said is caused by the federal health care law. He said that the district has been grappling with small increases in health insurance costs since Obamacare was passed seven years ago with the recent $100,000 rise the biggest.

“That came down from Obamacare, the individual mandate, employer mandates,” Jones said. “Obamacare has got to be paid for by somebody. You’ve got school boards that have to pay more to offer health insurance.”

In terms of federal testing requirements, Jones noted that rules requiring that the tests be taken on computers require the school district to increase it’s bandwidth capacity to allow for students to take the tests. He said that annually the Wellsville district doubles its bandwidth requirements for the three weeks of testing.

Jones said that Obamacare and testing are just among the issues he has seen from the federal government that prompted him to enter the congressional race.

“There are a lot of different regulations and red tape, in all different areas,” he said.

Jones said that he wants to curb the national debt if elected to Congress. He said that the increasing debt level is going to cause long-term problems for what the federal government can and cannot do in the future, along with having implications for individuals.

Jones said that Congress needs to be “proactive” in paying down the debt, but also needs to first address how new debt is being added. He said that passing a balanced budget amendment to the Constitution would be a top priority of his if elected.

The balanced budget amendment has been pushed for decades, largely by conservatives in Congress, who have said it would address federal spending. Progressives in Congress and their allied organizations have argued against a balanced budget amendment, saying that it would harm federal social policy programs by restricting spending and leading to cuts.

Jones, who has made the budget his top issue this year in Topeka, said that he wanted to address the federal budget by the proposed balanced budget amendment and by reviewing each line item to see if cuts could be made.

“You have to be real about your budget and your expenses and your economy,” Jones said.

Jones said that he wants to first look at the smaller items in the federal budget, including line item appropriations for various research studies that he noted add up. Various research studies have long been top targets for those looking to make cuts to the budget. The number of appropriations for the studies have been curbed in recent years with Congress enacting bans on earmarks in the federal budget.

“The things that over time grow,” Jones said of his budget cutting strategy. “It is a multitude of things that grow over time.”

Jones also said that he wants to address the national opioid crisis, noting that he has had personal experience. A realtor and property manager professionally, Jones said that he has seen people struggling with opioid addictions.

“The opioid crisis, it hits home, when you have someone renting from you and they can’t remember if they paid you rent. I’ve had that happen,” Jones said. “I care about people and I want them to receive the treatment they need. There are people dying.”

The opioid crisis has received bipartisan attention from many members of Congress, particularly from the states most hardest hit. President Donald Trump recently declared a national emergency on the subject, a move recommended to him by an opioid commission that he appointed. U.S. Health and Human Services Secretary Tom Price said that there has been an interagency task force meeting regularly in order to formulate a federal strategy on the subject.

Jones said that he wants to address the immediate opioid crisis but also review what is causing substance abuse in the first place in order to reduce abuse long term. He noted that many engage in substance abuse, as “an escape” and he would like to figure out how the problems can be addressed to avoid the need for drug and alcohol use.

Jones is currently in his third term in Topeka and has been chairman of the House Higher Education Budget Committee since January. Budget issues have topped Jones’ agenda this year with service also on the House Appropriations Committee and the House K-12 Education Budget Committee. He said that he requested budget related portfolio this year in order to focus on spending and debt issues in state government. In previous years Jones has served on various committees including addressing veterans, pension and health policy issues.

Jones points to his work on veterans’ issues during his time in the Legislature, along with his work on pro-life related issues.

“The most proud I am of the stuff we’ve done with life, including Simon’s Law this year,” he said. “The dismemberment abortion ban bill that I am proud of too.”

In terms of policy impacting the military, Jones noted that he developed legislation that addresses concealed carry and the military in Kansas.

The race in the second district has been getting more crowded since Jenkins announced earlier this year that she would not seek a sixth term in 2018. State Sen. Steve Fitzgerald (R-Leavenworth) has entered the GOP field. Earlier this month, former state House Minority Leader Paul Davis (D-Lawrence), the 2014 Democratic nominee for governor, announced his candidacy, becoming the frontrunner for the Democratic nomination. Several other Republicans have been mentioned as considering the race. State Treasurer Jake LaTurner (R), a former state senator, was mentioned as a potential candidate but has said he plans to seek a full term in the treasurer’s office next year, following his appointment to the post in the spring.

Jones points to his background outside of politics as helping to guide his decision to run for Congress. He joined the Army following the Sept. 11 terrorist attacks and served in Iraq. Iraq veterans of both parties have been successful and unsuccessfully seeking congressional and U.S. Senate seats, a trend that has been rising over the last decade.

Jones could be one of very few past participants on a reality show elected to Congress. In 2015, Jones competed on the show “American Ninja Warrior.” The first reality show participant elected to Congress is U.S. Rep. Sean Duffy (R-Wis.), who participated on “The Real World: Boston” in 1997, and other MTV shows. Duffy, who has competed in lumberjack competitions, has also been a commentator for ESPN for outdoor competitions.

Jones said that the show has been a benefit for the country, helping to promote physical fitness, and noted that his experience can be a good analogy for serving in public office, including Congress. He noted that while on the show, he could not hear the crowds while on the course and he did not hear the commentary those watching on television hear. He said that it was just him on the course alone, trying to make it.

“That will help me when I got to D.C. that I am serving the people of Kansas, I carry the weight on my shoulders of representing them,” Jones said. “You work hard for them. The mentality of it and you learn from that mistake and you move forward.”