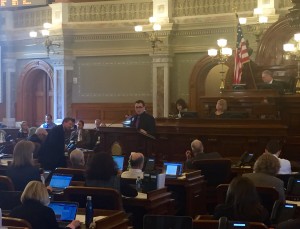 The measures were brought to the floor Thursday in the GOP-controlled House of Representatives as amendments to legislation that would restrict local governments from instituting employee scheduling and wage policies. Democrats sought to steer the debate to points on their side of the aisle, including the minimum wage hike.

“It is wrong to work full time and live in poverty,” Rep. Jim Ward (D-Wichita) said in offering an amendment to raise the state’s minimum wage to $13.25 an hour from $7.25 an hour over a three-year period.

Ward’s proposal drew instant opposition from Republican lawmakers, with Rep. Gene Suellentrop (R-Wichita), who was carrying the main bill, saying that “market forces” can drive wages in the state. He said that a hike in the minimum wage would hurt job growth in the state, along with negatively impacting small business.

Suellentrop said that the best way for people to earn more is gain an education and also work hard at one job and gain experience to move into a better paying job. Suellentrop’s comments on education gained some laughter on the floor as lawmakers grapple with a contentious school finance issue.

Rep. Mike Kiegrel (R-Olathe) said that lawmakers have previously defeated six attempts to raise the minimum wage and urged the defeat of Ward’s measure, noting that it would hurt small business. He said that the wage hike would cause prices of goods to go up as small businesses seek to recoup the money, he also said hiring would go down.

“Our businesses don’t have a printing press in the basement,” he said.

Democrats argued in favor of the wage hike with Assistant Minority Leader Louis Ruiz (D-Kansas City) saying that it would cause an increase in jobs. Rep. Barbara Ballard (D-Lawrence) said the bill would help women in the state, particularly single mothers.

“We all know that women’s wages are less than men’s wages. More specifically as far as Kansas is concerned we have a very large workforce of women and we know they are being paid less, especially in your average level of the workforce,” she said. “I want to stress the fact that we have so many women who are single heads of households. Most of them are at the poverty level.”

The state government efficiency study is recommending that the state consider rewriting its version of the Davis-Bacon Act. Earlier this month, House Transportation and Public Safety Budget Committee Chairman J.R. Claeys (R-Salina) told The Celock Report he would like to see discussion of this issue.

“One of the best ways we can help our states local communities be successful is to allow local government officials to adopt policies that fit the nature of their communities,” Curtis said. “In this body we frequently object to federal government overreach. But we seem to have no problem at all telling local governments what they can and cannot do.”

Rep. John Carmichael (D-Wichita) argued that the bill would be allowed on a county-by-county basis and said he did not think that rural Lane County would think the same way as the more urban Sedgwick or Wyandotte Counties.

Suellentrop argued against Curtis’ amendment, saying that with companies practicing in multiple cities and states, there needed be uniformity in the policies.

“We are a very mobile society and we have businesses that operate throughout the state and in multiple states,” he said. “We need a constant structure on those wage limits.”

Suellentrop tried to have Curtis’ amendment not ruled germane but Pauls said the amendment did relate to the main bill. The House though defeated the measure 37-80.

Curtis, who was chief of staff to a former mayor of the Unified Government of Wyandotte County and Kansas City, then offered an amendment that would allow Wyandotte County to reinstitute the prevailing wage law for their own public works projects.

Suellentrop argued against Curtis’ second amendment, saying that it would not provide uniform standards around the state and confuse bidders. Carmichael said that he believed that Suellentrop’s argument didn’t stand, saying that if bidders could not figure out the laws, they should not be participating in the bidding process.

Curtis’ second amendment failed 42-74, while the main bill passed 81-34. Curtis told lawmakers that she believed that Kansas should have followed its own history.

“Kansas has a long history of being a model,” she said. “It was in 1891 that Kansas was the first state to pass a prevailing wage for its own public works projects and after that many other states followed.”