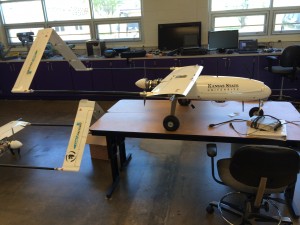 Kansas officials announced Tuesday that retired Air Force Lt. Col. Robert Brock will become the state’s first director of unmanned aerial systems, charged with working with higher education and business to grow the industry in the state. Brock, a Pittsburg, Kan. native, is a former commander of the U.S. Air Force 3rd Special Operations Squadron which was the first UAS squadron in special operations. The appointment comes amid growing plans among state officials to utilize UAS as an economic engine in the state.

“Kansas is my home. Kansas is uniquely positioned right now. The efforts that KState is doing have been known for years,” Brock told The Celock Report in an interview Tuesday. “The promise for business around the state is here. There have been a lot of businesses that have come out of the small towns here in Kansas.”

Brock was referencing the UAS program at Kansas State Polytechnic University in Salina. Based on a proviso inserted in state budget legislation earlier this year, Brock will spend half his time in Salina, with the remainder at KDOT headquarters in Topeka.

Brock said among his top priorities is to help grow the industry in the state, along with showing how UAS can be used in various commercial enterprises, including agriculture and infrastructure. He said he views his role as one where the state can help grow the sector and position Kansas as a national UAS leader.

“Our country is waiting on an organization that will commit and make this thing work,” Brock said of the need for UAS growth. “As I see other states work on the same process I don’t see them embrace it to the point of the lessons learned. I see the capabilities for public safety and protecting privacy, all of those capabilities that UAS has.”

Brock comes to the UAS director’s job following a 22-year career in the Air Force, where he was focused on the growth of UAS within the military, skills he said translate to the civilian use of UAS. Part of his career included command of the 3rd Special Operations Squadron, which had the primary mission of flying unmanned aircraft as part of intelligence operations worldwide.

Brock noted that the use of UAS in intelligence was able to provide support to ground forces at a fraction of the cost of traditional air surveillance programs.

“UAS provides the ability to see and measure precisely,” Brock told The Celock Report. “The ability to help those guys when we were in a combat situation is we were able to stay for 20 hours and provide safety. Instead of bringing a huge amount of aircraft in and out.”

Brock had started his Air Force career as a helicopter pilot, including piloting the MH-53 helicopter, eventually moving into the intelligence, surveillance and reconnaissance community and work in UAS. Prior to commanding the 3rd Special Operations Squadron, Brock worked as a detachment commander in the squadron, overseeing the creation of a UAS special operations squadron.

Under Brock’s command, the 3rd Special Operations Squadron was recognized by former Defense Secretary Robert Gates as the top intelligence, surveillance and reconnaissance unit in the Defense Department in terms of efficiency.

Brock said that his experience from the military will translate to his new role in state government. He described his role in the Air Force as a consumer facing role, where he had the freedom to work directly to provide services to the consumers of services the squadron was providing. He said that will be key in showcasing the abilities of the UAS community in Kansas to help further economic growth.

“When people are able to demonstrate the abilities around a customer base, business happens automatically,” Brock said. “Our focus should be on how well to serve that customer.”

Brock said among his first goals is to utilize UAS more within state government, starting in the Department of Transportation. He noted that KDOT inspects 2,500 bridges a year, which he described as a time consuming process for the agency. He said that utilizing UAS for the bridge inspections, the agency will be able to make the inspections more efficient and also save money long run for the state. Brock also said he wants to utilize UAS in other inspections that KDOT does, including those of large light poles.

Brock said that by using UAS, state government can become an example for the private sector in the benefits of the aircraft.

“We can demonstrate that good procedures can make a safer system,” he said. “We know that with our own employees we can show we have a robust system.”

Brock also said he plans to work closely with research officials at the UAS at KState Poly on growing economic development from the research conducted at the college.

KState Poly is part of a new UAS research triangle in the state, comprising the Salina-based program along with Wichita State University and the University of Kansas. The triangle was created this year in an effort to combine the abilities of the three campuses to grow UAS in the state.

“Colonel Brock’s background speaks for itself,” Claeys told The Celock Report. “I couldn’t be happier with the hire or prouder of the team we have at KDOT Aviation as we work toward bringing UAS research and engineering jobs to Salina.”

Claeys has been pushing a UAS legislative program that would include the creation of a small business incubator at KState Poly, a new tax credit for Kansas college graduates who stay in Kansas to work in engineering and UAS and using part of the state pension fund alternative investment portfolio to invest in state small businesses.

Brock said he has held conversations with state lawmakers on UAS policy, including in the areas of economic development and privacy. He said he plans to continue to work closely with them when the 2017 legislative session kicks off next year. He noted that while economic development is a priority, privacy issues will also be.

A recent report by PricewaterhouseCoopers placed a $127 billion valuation on commercial UAS services worldwide, with the agriculture and infrastructure being among the top sectors for UAS growth. Brock noted that he also believes agriculture will be a top use for UAS. The KState Poly UAS research center has long promoted UAS services in a number of areas including agriculture and public safety.

Calling Kansas “a pioneering state,” Brock noted that Kansas farmers are quick to be innovators and will likely embrace UAS quickly. He said that this will help grow UAS in the agricultural sector worldwide.

“We are Kansas, we are the heartland and we have to get into agriculture with UAS,” he said.

Brock will report to state Aviation Director Merrill Atwater, who told The Celock Report after his appointment earlier this year that the industry was “very important to the state.” Atwater noted at the time that KDOT wanted to work closely with the research programs to grow the industry.

Brock also noted a need to focus on growing UAS training programs, including promoting the training need to those in the private sectors. Using the real estate industry as an example, he said he wants to be able to grow UAS training for realtors, who have been using it as a growing part of marketing efforts. He said that increased training will help grow UAS use and show how UAS can be used in various business sectors.

Brock sounded optimistic on the future of UAS in a state long known for aviation innovation.

“Our timing is pretty perfect here in Kansas to embrace this as another aviation enterprise,” he said.