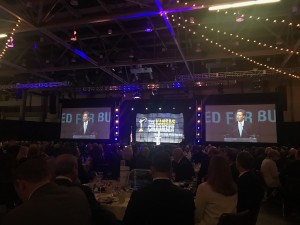 Kansas Gov. Sam Brownback (R) has announced that he will veto legislation hiking income taxes in the state.

Brownback, who led the state in enacting large tax cuts in 2012, made the announcement Tuesday evening at the annual dinner of the Kansas Chamber of Commerce. Brownback said the tax hike bill – passed by lawmakers last week to fill a large budget gap – would harm economic development in the state. The bill – which includes a new 5.45 percent tax rate, the repeal of the no income taxes for LLC owners and a new tax tier – has been praised by proponents as a way to address the annual budget deficits the state has seen in recent years.

“I won’t sign it,” Brownback said to cheers from the business-oriented crowd.

Brownback led into the announcement by promoting his own economic record, citing population and business formation growth during his tenure in office. Brownback made the tax cuts a signature policy initiative in his first term, helping steer them to passage in the Legislature in 2012. The Brownback tax cuts included the elimination of taxes for LLC and S Corps, along with a controversial provision that exempts LLC owners from paying income tax on money made through the LLC.

Brownback said the tax hike, which would be retroactive to January 1, would stunt small business growth in the state and cause population to head to other states. He said that with President Donald Trump and the Republican-led Congress looking at tax cuts, Kansas should not be raising taxes.

“If this bill became law everyone’s income taxes in this state will go up and they will go up retroactively,” Brownback said.

Brownback noted that the tax cut passed without the support of Senate President Susan Wagle (R-Wichita) and House Speaker Ron Ryckman (R-Olathe) and did not receive support from many Republican lawmakers. The proposal, which originated from Democrats on the state House Taxation Committee, was the first tax proposal to reach Brownback’s desk in what is likely to be one of the dominant themes of this year’s legislative session. The bill – which garnered support and opposition from both sides of the aisle – easily passed the House with little debate and narrowly passed the Senate after two hours of debate.

Legislative opponents of the tax bill, cited the tax hike on the middle class as a main reason to oppose the bill, along with the retroactive nature of the hikes.

Brownback said that he plans to work with lawmakers to develop a new tax plan and budget. He has proposed a plan that includes consumption tax hikes on alcohol and tobacco, among other areas.

Brownback called on those in attendance at the Chamber dinner to help him in preventing lawmakers from overriding his veto.

“I ask the people in this room to help us sustain the veto,” he said.