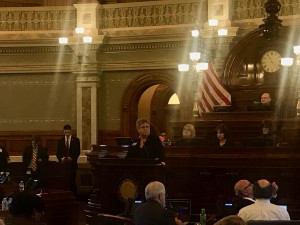 Kansas lawmakers have advanced legislation that would allow for beer sales in supermarkets, a compromise measure between those pushing for expansion of liquor sales and liquor storeowners.

The state House of Representatives voted 80-45 Thursday to approve legislation that would allow for supermarkets around the state to sell beer with up to six percent alcohol content. The measure marked a compromise between the Uncork Kansas movement, which was pushing for beer and wine sales in supermarkets and liquor store owners, who pushed for sales of everything except 3.2 percent beer to be restricted to liquor stores. Liquor stores will be allowed to expand their product lines to include tobacco and lottery products, along with other items. Currently supermarkets can sell beer with 3.2 percent alcohol content in the state.

The compromise plan will allow liquor stores to sell other items, including ice, cups and mixers for up to 20 percent sales, along with an unlimited amount of tobacco products and lottery tickets, in exchange for the beer in supermarkets.

Under the plan, which will take effect in 2019, Uncork pledges not to lobby for new alcohol products in supermarkets until 2029, at which point state officials will study the impact. The pledge is an unwritten “gentleman’s agreement” which opponents say is not binding. The pledge was included in the minutes of the House Commerce, Labor and Economic Development Committee meeting earlier this week that approved the measure. The pledge was placed in the minutes by supporters to establish a written record of the pledge and legislative intent for any future judicial review.

Supporters of the measure heralded it as a compromise plan that will deliver something for both sides. The supporters said that with 3.2 percent beer production reducing, a bill to allow beer and wine sales in supermarkets will likely come by 2020 and this would take that option off the table. Opponents said that the plan will take away a major item of sales from the liquor stores and force them out of business. Opponents also noted that the liquor store group that negotiated the compromise includes only 20 percent of the state’s 750 liquor stores.

Carmichael, who was a top opponent of the measure during the Commerce Committee meeting, said that he was looking out for liquor stores around the state, now and in the future. He said that he can envision a future push for expanded liquor sales in supermarkets which will hurt larger liquor stores.

Carmichael also questioned the 10-year agreement, calling it “not worth the paper it’s written on, it’s not even written on paper.” He said that the plan could violate anti-trust laws.

Multiple opponents said they were looking out for the small liquor stores in their districts, questioning their business viability if the compromise bill becomes law. Rep. Larry Hibbard (R-Toronto) said that many of the 10 liquor stores in his district oppose the measure and not that they are not part of the statewide lobbying effort. He said the lack of membership in the group shows that the compromise was not negotiated by all of the liquor stores.

“As I start hearing more and more from the small liquor stores I find out that they don’t belong to the association because of the costs,” Hibbard said. “As small store owners they don’t have the opportunity to attend the meetings.”

Supporters of the measure said that the compromise would be a boon to liquor stores. Rep. Jan Kessinger (R-Leawood) noted that professionally he has advised retail stores and that the data shows that tobacco and lottery sales are big income generators for retail stores. He said that allowing liquor stores to start selling these products will increase profits for them.

Kessinger noted that consumers will continue to buy beer in liquor stores, along with buying it in supermarkets long term. He said that a consumer just buying beer will likely go to a liquor store and will then likely buy other items including chips, beef jerky, ice and cigarettes. Kessinger said that consumers just wanting beer would prefer to stay away from the lines in a supermarket for the quick purchase.

Rep. Tom Cox (R-Shawnee) questioned if it was the state government’s job to figure out how to run businesses statewide.

“If a business cannot survive if another business can sell beer six percent or less, maybe it is not our job to prop them up,” Cox said.

Cox noted that the 3.2 percent beer is declining in production and if the compromise measure is not enacted soon, then a larger bill is coming. House Commerce, Labor and Economic Development Committee Ranking Minority Member Brandon Whipple (D-Wichita) said that liquor storeowners in his district had something similar, noting that a “crisis” could occur for them if 3.2 percent beer is no longer made and supermarkets press for a full-scale bill.

Rep. Kristey Williams (R-Augusta) said that her views on the liquor issue have evolved with her being originally against beer and wine in supermarkets but that conversations with the business community in her district have made her come around to supporting the compromise.

Williams said that she can envision new lines of sales for liquor stores in the beer world. She said this can include being a hub for the sales of craft beers if supermarkets don’t want to go into that line of sales.

Cox said that he can easily see liquor store owners using the law to make it work for them.

“The savvy business owner will take this and make it more profitable,” he said.