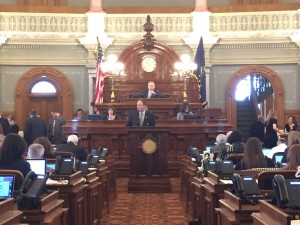 The Kansas Supreme Court struck down the state’s latest school finance law Monday, setting the stage for another legislative battle over school funding next year.

The Supreme Court also struck down a provision in the law that allowed school districts to use capital outlay funds to pay for utility bills and insurance. The Court said that each school district in the state had different abilities to pay those funds out of capital outlay.

While the 2017 school finance law raised school spending by $292.5 million over two fiscal years, the Court ruled that the law’s new base per pupil state aid was less than what had been recommended to lawmakers by nonpartisan research groups.

Monday’s ruling continues the ongoing school finance debate, which has dominated Kansas politics for over a decade. The new law was largely drafted by moderate Republican lawmakers, who gained control in Legislature following wins in the 2016 election, largely on the school funding issue. Legislative Democrats, who also gained seats with lawmakers elected on the school funding issue, had questioned the new school finance law, saying that it did not raise an adequate amount of funds to meet the constitutional test of the Supreme Court.

Conservative Republicans in the Legislature largely opposed the school funding law, saying that it was the cause of a large tax increase for the state.

The 2015 law was adopted by a then conservative dominated Legislature on the recommendation of Gov. Sam Brownback (R), who had made redesigning the school finance formula a key part of his legislative agenda. The block grant system was immediately controversial, and garnered significant opposition from the teachers’ union and parent groups, along with moderate Republican lawmakers and Democrats. The block grant bill was a large part of the campaign against conservative lawmakers in 2016, particularly in suburban Johnson County.

Monday’s ruling will force lawmakers to take up the issue again, in a political environment dominated by the 2018 gubernatorial campaign, where education policy was expected to be a top issue. The 2018 legislative session will also feature a likely change in the state’s top leadership with Brownback likely to leave office in the coming weeks following expected U.S. Senate confirmation of his nomination to an ambassadorship in the Trump Administration. Lt. Gov. Jeff Colyer (R) is slated to succeed Brownback in the governorship.

Colyer will be forced to negotiate with lawmakers on a new school finance law while at the same time battling in a large Republican gubernatorial primary in his bid to capture a full term in the governorship. On the Democratic side, state House Minority Leader Jim Ward (D-Wichita) will be battling in a competitive Democratic primary while working on school finance legislation.

Under the Supreme Court ruling, both sides have until April 30 of next year to submit briefs to the Court explaining a new legislative solution. The Court has stayed previous rulings that would potentially shut the state’s schools until June 30 of next year.