Kansas Right to Hunt and Fish One Step Closer 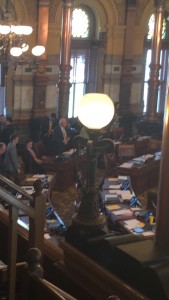 Sen. Ralph Ostmeyer carrying the amendment on the Senate floor.

Kansas senators gave preliminary approval Wednesday to a constitutional amendment for the right to hunt and fish.

The Senate’s action – in the form of a voice vote – brings the amendment one vote away from the amendment being sent to a statewide referendum to add the amendment to the state constitution. The amendment passed with limited debate with advocates saying that it would address potential future measures to limit hunting and fishing in the state. The bill overwhelmingly passed the state House of Representatives last month and final Senate action is expected this week.

“Hunting and fishing are deeply routed in Kansas culture and have a major economic impact on the state,” Senate Federal and State Affairs Committee Chairman Ralph Ostmeyer (R-Grinnell) said about the amendment.

The amendment – introduced last year by Rep. Adam Lusker (D-Pittsburg) and former Rep. Travis Couture-Lovelady (R-Palco) – could make Kansas the 20th state in the country to adopt a state constitutional amendment relating to protecting the right to hunt and fish. In addition two states –California and Rhode Island – have adopted right to fish amendments. The first state to adopt a right to hunt and fish amendment was Vermont in 1777, with Texas voters adopting such an amendment in 2015.

Ostmeyer stressed the economic importance of hunting and fishing on Kansas, noting that the state has 300,000 hunters and 400,000 anglers, with the industry creating 10,000 jobs statewide. During the House debate last month, House Federal and State Affairs Committee Vice Chairman James Todd (R-Overland Park) said that hunting and fishing has a $1 billion collateral impact on the Kansas economy annually.

Sen. Pat Pettey (D-Kansas City) questioned Ostmeyer on why the bill was needed, saying that people are currently hunting and fishing in the state. Pettey’s comments were similar to Rep. Annie Tietze (D-Topeka) during the House debate.

“I was curious on the fact that we have hunting and we have fishing presently going on in Kansas,” Pettey said. “I am trying to understand the need for a con amendment that guarantees what we are already doing.”

Ostmeyer said that the bill was needed because of groups around the country that have advocated against hunting. Pettey questioned if any of the groups were working in Kansas presently, which Ostmeyer said was not occurring.

Sen. Oletha Faust-Goudeau (D-Wichita), the top Democrat on the Federal and State Affairs Committee, told the Senate that the bill was forward thinking. She said that the committee was told that the amendment would prevent a future effort to try to limit hunting and fishing in the state.

The amendment has been pushed by the National Rifle Association and sportsmen’s groups around the country, including the Congressional Sportmen’s Foundation. Couture-Lovelady stepped down from the House late last year to become a state liaison for the NRA.

The National Conference of State Legislatures has said that similar amendments are pending in Michigan, New Jersey and New York. NCSL also noted that 88 percent of Mississippi voters voted in favor a similar amendment in 2014.

Ostmeyer stressed to his colleagues that the amendment would provide protections to the state’s hunters and fishers.