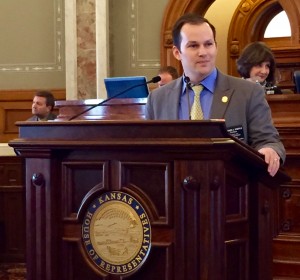 A Kansas Democrat’s efforts to amend a refugee resettlement bill led to the bill being sent back to committee for further study Thursday, over the objections of top Republicans on the committee.

The state House of Representatives voted 72-39 to send the bill – which would create a new refugee resettlement office – back to the Federal and State Affairs Committee. Supporters said the bill would have the state codify federal refugee law to have state and local consultation, while opponents said it could lead to a ban. The debate though centered largely on House Democratic Agenda Chairman Brandon Whipple’s (D-Wichita) efforts to include provisions in the bill to protect religious organizations and children.

Rep. Tony Barton (R-Leavenworth), who was carrying the bill, said that it would codify federal refugee law and create the new office in the Department of Children and Families. Among the provisions would be to allow the Kansas Bureau of Investigation to investigate crimes against refugees and crimes committed by refugees.

Barton denied claims that it would allow the state to reject refugees. Gov. Sam Brownback (R) has already said he would not want Syrian refugees to be resettled in the state.

“The bill does not create a new law, it codifies current law,” Barton said. “It does not kick current refugees out of the state and it does not prohibit new refugees. That’s not we do as Americans or we do as Kansans.”

Whipple took to the floor to reject what he said is a fear that is gripping the country, noting that the country has listened to Republican presidential frontrunner Donald Trump and others, who he said are responsible for the fear based politics. Whipple urged his colleagues to reject fear.

Whipple quoted former President Ronald Reagan and Brownback’s time as a U.S. senator on the need to listen to faith issues in relation to refugees. He also cited the work of several religious groups, including the United Methodist Church and the Episcopal Church on helping refugees. Whipple also quoted Pope Francis on the need for organized religion to work to help refugees.

Whipple’s religious freedom amendment would have blocked the state from stopping religious groups – including Catholic Charities – from helping refugees in the state. The House rejected the religion amendment 54-56.

“I believe that this bill needs to go away and not be passed,” Whipple said. “If it is passed it is not the role of government to stand in the way of groups from fulfilling their religious beliefs.”

The House rejection of Whipple’s religious freedom amendment followed a lengthy debate over the intersection of government and religion and Whipple being interrogated by one Republican lawmaker with the same question over if the amendment would violate federal law several times.

Federal and State Committee Affairs Vice Chairman James Todd (R-Wichita) said that while he liked Whipple’s proposal “on the face of it” he wanted to see more study to make sure it did not negatively impact the state in terms of what services the state would need to provide.

Federal and State Affairs Committee Chairwoman Jan Pauls (R-Hutchinson) expressed concerns that the amendment would create “sanctuary communities” within the state by allowing religious organizations to work on their own without state regulation.

“My concern is we’d be creating a sanctuary city or a sanctuary congregation,” Pauls said. “If federal guidelines require that organizations work with the government, the local government in this case and the state government in settling refugees. If we adopt this amendment we’d be saying we’d have groups that they don’t have to work with government. We’d be setting up these congregations since they would not receive federal funds.”

Whipple’s repeated refusals to answer Pauls’ interrogation with a yes or no, led to Pauls, a former district court judge, to say in near frustration “I’d like him to answer the question.” Whipple had said that he’d be willing to keep the House into session until the midnight deadline to adjourn until Pauls realized he was answering the question in his own way. Whipple’s threat led to the presiding officer, Rep. Marvin Kleeb (R-Overland Park), to ask him to move on.

Pauls later told her colleagues that she was surprised by Whipple not answering her question with the yes or no she was asking for.

“That’s the first time I’ve seen someone refuse to answer something in the House,” Pauls said. “We usually answer.”

House Vision 2020 Committee Chairman Larry Campbell (R-Olathe) expressed concerned that Whipple’s amendment could allow churches to circumvent local government on such issues as land use variances and building permits. Whipple said his amendment “had noting to do with building permits.”

Following the defeat of his religion amendment, Whipple then offered an amendment that would allow refugee children to come into Kansas. He cited the example of the toddler who drowned off the European coast after being sent on a raft by his parents to escape the war in Syria. In an effort to illustrate his point, Whipple provided his colleagues with the famous photo of the children being brought on to European soil.

Whipple said the photo reminded him of his own two-year-old son, A.J., and how if he lived in Syria he would do anything in order to give his son the chance to live in a safe country.

Whipple said he wanted to learn from history and protect children. He cited how during World War II, the United Kingdom took in almost 10,000 Jewish children from Germany, Austria, Czechoslovakia and Poland to save them from the Holocaust. He said that he felt the current situation required Kansas to step to protect the children of Syria.

“Let us at least allow in the children,” Whipple said. “History has taught us to protect the children.”

Opponents questioned if Whipple’s children amendment would have unintended consequences for the state. They asked if the state would now have to assume responsibility for the children, who may not have parents or relatives in Kansas. Whipple said different groups – including religious organizations – have been offering services to the children. Whipple said it would be up the Department of Children and Families to determine if the children’s parents would be allowed to join them in Kansas.

Rep. Dick Jones (R-Topeka) said that he thought that the move could lead to a situation where the state would be opening itself up to becoming a home to children in any country “where there is fear and evil going on.” Jones turned the issue partisan, by saying if the GOP wanted to open the state up to refugee children, Democrats would be critical saying it would take children out of their homelands. Whipple did not respond to that line.

Jones also was critical of the United Kingdom’s move to welcome Syrian refugees.

“The United Kingdom has lost its identity,” Jones said. “The country of Shakespeare, Keats and Churchill is not there, it is practically an Arab country.”

British Prime Minister David Cameron has announced plans to settle 20,000 refugees in his country and has appointed a minister to serve jointly within the British Home Office, Department for International Development and Department for Communities and Local Government to coordinate the effort across the British government.

Whipple’s amendment on children did not receive a floor vote due to the vote to send the bill back to committee.

House Transportation and Public Safety Budget Committee Vice Chairman Russ Jennings (R-Parsons) made the motion to refer the bill back to the Federal and State Affairs Committee, saying that the lengthy debate and Whipple’s amendments showed that the bill needed more discussion. Jennings said that after the Sept. 11 terrorist attacked, it was shown that terrorists wanted Americans to change their behavior. He said that he believed was happening in the Kansas Legislature.

“The terrorists win when we run in fear,” Jennings said. “They win when we change our behavior. They are winning here today.”

Rep. Annie Tietze (D-Topeka), the top Democrat on the Federal and State Affairs Committee, urged her colleagues to send the bill back to committee, saying that it needed more work. She said that the bill passed committee by one vote and did not receive sufficient debate. Tietze said the committee heard primarily from supporters of the bill and that Pauls did not allow enough time for opposition to speak.

“This bill deserves to go back to committee so it can get a full hearing,” Tietze said.

Pauls objected to Tietze, saying that she believed the bill received a full hearing from the committee. She also said that by her recollection the bill passed the committee by two votes. Pauls said that with a legislative schedule a vote to send the bill back to committee would mean the bill’s death.

“If you send this back to committee you are pretty much dooming it,” she said.

Rep. Joseph Scapa (R-Wichita), a Federal and State Affairs Committee member, stressed that the committee held in-depth hearings on the issue and the bill did not need to go back. He also said that the bill would not ban refugees.

This is the second time the House has sent a bill back to committee this year. Previously the House voted to send a bill relating to increased vehicle registration fees to fund new troopers within the Kansas Highway Patrol to the Appropriations Committee following floor amendments changing the funding mechanism. The trooper bill had originated out of the House Transportation Committee.

During the debate Pauls did not indicate a time frame for when her committee would take up the bill again. If the bill were to pass out of Pauls’ committee a second time, there would be no guarantee that it would reach the full House again.

Whipple told his colleagues in the debate that the subject was motivating him to address the religious freedom and children’s issues.

“I have not felt this passionately about something in a while,” Whipple said. 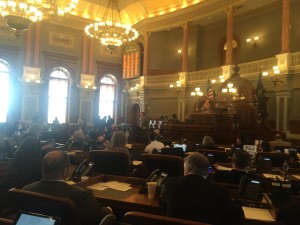 The scene in the Kansas House during the Whipple amendments.