Kansas Unlikely To Do Away With Qualification Based Selection 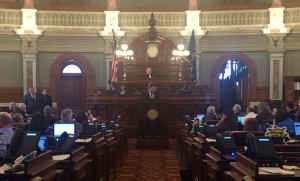 Kansas officials are unlikely to follow one of the recommendations in a state government efficiency study that calls for the state to do away with qualification based selection for outside engineering firms.

Amid growing opposition from the state’s business and engineering community, along with testimony from state transportation officials, a key transportation budget lawmaker said that the recommendation is likely not to be enacted. The efficiency report from the consulting firm Alvarez & Marsal – released last month – included a recommendation that the state overhaul its transportation procurement policies, including doing away with QBS, which requires the state to use qualifications in hiring architecture and engineering firms, and replace it with hiring the lowest responsible bid.

The A&M report says that the state could save 10 percent by using “non-federal contract evaluation standards.”

State House Transportation and Public Safety Budget Committee Chairman J.R. Claeys (R-Salina) told The Celock Report that state Transportation Secretary Mike King and Department of Transportation officials told his committee earlier this week that KDOT will likely continue to follow QBS even if lawmakers were to make a change. Claeys said that the testimony also showed that a change to the policy would likely not provide many cost savings to the state, since the change would only apply to those funded solely by the state. Any transportation projects that include federal funds are subject to QBS under federal law.

“When you are looking at the small amount of projects subject to this the benefit appears to be small,” Claeys said. “After speaking to KDOT, even if QBS was not required by state law they would likely use it in every instance as a best practice.”

Claeys said that while his committee will have discussions on all of the recommendations from the A&M report that fall under its jurisdiction, QBS likely remains safe.

“I am not convinced,” Claeys said of cost savings from the move away from QBS.

QBS was put in place by the federal Brooks Act in 1972 and similar laws have been put in place by 43 states. In addition another four states follow QBS practices in the absence of a state law. QBS is pushed by engineers saying that it saves money for governments in the long run, noting that while the state could save money in the short term, it will end up spending more in the long term with change orders, inferior products and projects that might not work for long term changes.

Scott Heidner, the executive director of the American Council of Engineering Companies of Kansas, told The Celock Report called any proposal to do away with QBS “penny wise and pound foolish.” He said that by moving to a lowest bid situation, history has shown that the state would likely experience more change orders during the construction projects along with delays from changes that need to be made. He said that while the infrastructure project will “hopefully be functional and safe” it will not be the best project for the location.

Heidner, who testified in front of the Transportation and Public Safety Budget Committee this week, said that by investing in more qualified engineering consultants will allow the state to receive reports that look not only at the current needs but future needs at the location. He said this can include looking at future growth and traffic issues in the region, along with potential wetlands and flood plain issues.

Engineers and architects hired under QBS will sit down with government officials to discuss all of the issues according to Heidner, allowing for a project that covers a variety of future needs.

“Beyond a shadow of the doubt, it is a proven procurement process,” Heidner told The Celock Report. “The federal government uses it, the large majority of the states use it, many cities and counties use it.”

Heidner noted that the practice is favored by the American Public Works Association, which represents local and state public works officials. APWA has issued an advocacy statement in support of QBS.

Anthony Attanasio, the executive director of the New Jersey Utility and Transportation Contractors Association and a former assistant transportation commissioner in New Jersey, told The Celock Report that it would be a “big mistake” for any state to move away from QBS. He said that contractors prefer that the engineers be hired through QBS since the project will require less changes long term during the construction process. He echoed Heidner that it would provide a cost savings.

“Spending more for quality up front will save you time and money on the backend,” Attanasio said.

Eric Stafford, the vice president for government affairs at the Kansas Chamber of Commerce, said the Chamber’s membership is strongly opposed from any move away from QBS. Stafford said the move away from the process would lead to the state missing out on “innovative strategies that will save money in the long term.”

Stafford cited a project that local officials in Olathe had to face where they were considering an overpass for trains but the engineering firm said that a tunnel would provide a better long-term plan for the city. He stressed that lawmakers should think long term on this and other A&M and resist the temptations to look for immediate cost savings to plug the state’s budget hole.

Claeys, an expert on government procurement issues, said that while changes to QBS are unlikely to be discussed at length by his panel, he does want to see the committee discuss a recommendation in the report to do away with the state’s version of the federal Davis-Bacon Act. The law requires that workers in transportation projects be covered with a prevailing wage and fringe benefits. While the state would not be allowed to move away from Davis-Bacon for federal financed transportation projects, it could for state funded projects.

The A&M report said that Oklahoma, Texas, Iowa and Kentucky do not have a state level Davis-Bacon Act in place.

Claeys said that the main issue is the government setting the requirements for companies in order to receive contracts and not allowing companies to have the negotiations with their employees on their own. He did not say if the committee will endorse the recommendation, only saying it would be discussed.

“The idea is then that the employer is determining with the employee rather than the state mandating that an employer adhere to it,” he said. “That is basically the union influence in our federal government that we don’t have here.”