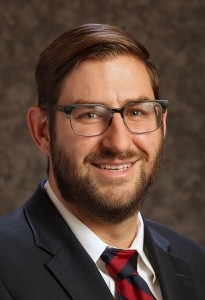 A Kansas lawmaker has become the 25th state lawmaker in the country to introduce legislation that would require presidential candidates to disclose their tax returns to end up on a state ballot.

Rep. Brett Parker (D-Overland Park) introduced legislation Tuesday to require disclosure of tax returns; financial conflicts of interest and felony convictions for a presidential candidate to be placed on the state’s general election ballot. The measure – which has been introduced in 15 states – has become popular nationally following President Donald Trump’s decision last year to not release his income tax returns. Trump was the first major party presidential nominee in over 40 years to not release the tax documents.

“What has been highlighted in this past election is the kinds of foreign businesses they are dealing with,” he said. “Do they have a debt personally or through a business that may influence decision making?”

Trump’s past business dealings – which include real estate and hospitality holdings in the U.S. and abroad – have been a rallying point for Democrats and progressives, including Trump’s decision not to liquidate his business holdings. Trump has said that he has handed control of the Trump Organization to his sons, Donald and Eric, and would not be discussing business with them.

“Questions of bribery and conflicts of interest arise when candidates for president and vice president fail to disclose their tax returns,” the Dayton Daily News quoted Clyde as telling her colleagues about the bill. “Without these documents, Ohio voters lack critical information on candidates vying to occupy the highest office in the land. Recent public polling indicates that nearly two-thirds of Americans believe presidential candidates should disclose their tax filings.”

Several states have seen multiple bills submitted, including Illinois where state Sen. Daniel Biss (D-Evanston) on Tuesday became the third lawmaker in the state to introduce the legislation. Biss said that in addition to reviewing potential conflicts of interest, inspection of Trump’s tax returns would have allowed the public to review Trump’s business record.

On Tuesday, the New Mexico state House Local Government, Elections, Land Grants and Cultural Affairs Committee defeated a similar proposal on a 3-3 vote, where one Democrat joined Republicans to defeat the measure. Republicans on the New Mexico committee expressed concerns that the bill did not extend to statewide officials and could potentially leave New Mexico without a Republican presidential candidate in 2020 if Trump were to not disclose his returns during a potential reelection campaign.

Parker’s bill could face an uphill climb in the Republican-controlled Kansas Legislature. House Elections Committee Chairman Keith Esau (R-Olathe) told The Celock Report that Parker’s bill would not have a hearing in the committee this year.

“We have a lot of other things on the plate and I don’t see us having time to deal with this,” Esau said.

Esau said that while he understands “there is a lot of interest in the personal life of the president,” he has not heard a lot of demand for a bill like Parker’s. He did not say if the bill would have a hearing in the Elections Committee next year, saying that he would see if there is interest in the topic at that time before making a decision.

Kansas Secretary of State Kris Kobach (R), a Trump advisor on immigration issues, said he is opposed to the bill based on constitutional issues.

“In my opinion, the bill is unconstitutional because it imposes additional restrictions on a federal race,” Kobach said in a statement to The Celock Report. “The Supreme Court has ruled that states cannot impose additional requirements on federal offices.”

In 1995, the U.S. Supreme Court ruled in U.S. Term Limits, Inc v. Thornton that states could not impose term limits on members of Congress and U.S. senators since the offices were governed by the U.S. Constitution and not state laws. The decision overturned term limits laws for federal officials imposed by 23 states.

In the opinion in the term limits case, the Court referred to the 1969 Supreme Court decision in Powell v. McCormick, where the Court ruled that the U.S. House of Representatives could not impose additional qualifications on elected members than those imposed by the Constitution.

While the qualifications for president and Congress are set by the U.S. Constitution, individual states imposes ballot access laws for the offices, primarily the process of qualifying for the ballot. In the past, state lawmakers around the country have unsuccessfully proposed legislation to require presidential candidates to disclose their birth certificates in order to qualify for the ballot.

He stressed the bill was not aimed directly at Trump and noted that while Trump’s case highlighted the issue it would be beneficial long term.

“It is regardless of the party. It is the precedent of disclosing that information has been broken,” Parker said. “Moving to 2020 and beyond it is open to candidates for either party to flout that expectation. Passing this legislation would bring back what most voters think is a pretty good precedent.”