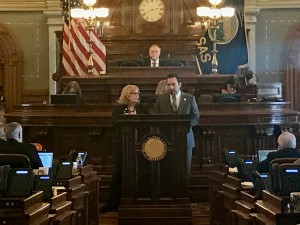 Kansas’ governor has vetoed the state’s Medicaid expansion, sending the bill back to the state Legislature.

Gov. Sam Brownback (R) announced Thursday morning that he had vetoed the bill, saying that it does not contain work requirements, does not defund Planned Parenthood and comes at a time of federal health care debate. Brownback’s veto of the legislation has long been expected and sets the stage for a high stakes battle on the floor of the state Legislature, which passed the bill a few votes shy of what is needed to override a gubernatorial veto.

“I am vetoing this expansion of ObamaCare because it fails to serve the truly vulnerable before the able-bodied, lacks work requirements to help able-bodied Kansans escape poverty, and burdens the state budget with unrestrainable entitlement costs,” Brownback said in a statement. “Most grievously, this legislation funnels more taxpayer dollars to Planned Parenthood and the abortion industry. From its infancy, the state of Kansas has affirmed the dignity and equality of each human life. I will not support this legislation that continues to fund organizations that undermine a culture of life.”

In his veto message, Brownback said that he did not want to expand Medicaid in the state while Congress and President Donald Trump are working on potential changes to the Affordable Care Act. A Republican federal health care overhaul was pulled by Congress last week following a lack of votes to pass the bill which was a key priority for Trump and U.S. House Speaker Paul Ryan (R-Wis.).

Trump and congressional leaders have indicated that they are having continued discussion on health care policy going forward included potential changes to the Affordable Care Act.

“These changes may impact many aspects of the Kansas Medicaid program, and attempting to overhaul our current system while these changes are still being worked out is potentially harmful to our state,” Brownback wrote in his veto message.

The Medicaid expansion veto is the latest in a long debate over the program in the state, which started after the Affordable Care Act was passed and the U.S. Supreme Court ruled that states could opt into the program. Advocates for the expansion have argued that other Republican states have adopted the Medicaid expansion and note that it was embraced by Vice President Mike Pence when he was Indiana’s governor, along with Ohio Gov. John Kasich (R) and former Arizona Gov. Jan Brewer (R), when she was in office.

Legislative Democrats tried several times in 2015 and 2016 to force a floor vote on Medicaid expansion, with legislative leaders blocking attempts to bring amendable bills to the floor.

Earlier this year the House Health and Human Services Committee held more Medicaid expansion hearings but voted to table the bill, effectively killing it for this year. Last month, Democrats motioned to bring the bill to the floor and legislative leaders allowed a floor debate on a mental health bill that would allow for a Medicaid expansion amendment. Following several hours of debate and unsuccessful amendments from conservative Republicans on a number of issues, including to defund Planned Parenthood, the House passed the bill. The state Senate moved forward on the bill this week.