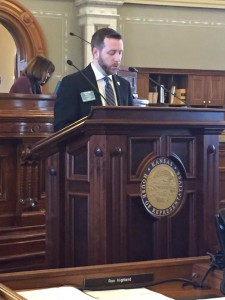 After assurances that it would save money and increase response time for a Sharknado event, Kansas lawmakers have advanced a local government shared services bill.

The state House of Representatives gave preliminary approval Tuesday to legislation that would expand the definition of municipality to include a variety of local government districts to reduce red tape in the process needed for the districts to enter into shared services agreements with cities, townships and counties. Current law requires approval from the state attorney general before the districts can enter into shared services agreements with other local governments.

“By expanding this definition, contracting for services and cooperation is achieved with greater efficiency,” Rep. Tom Cox (R-Shawnee), the bill’s sponsor, said during a floor debate.

Under the legislation school districts, library districts, fire districts, road districts, water districts, sewer districts and drainage districts would be added to the definition of municipality for the purposes of entering into a shared services agreement. The revised definition would remove the requirement of achieving the permission of the attorney general’s office and the need for filing the agreement with the secretary of state and county register of deeds.

The legislation has been backed by various local government groups in the state, who have said it would save time and money. Cox noted that the bill had passed the state House last year, but was then amended by the state Senate to hold another bill, a procedure known as “gut and go.”

Showing that debates over local government shared services can be fun; Rep. Melissa Rooker (R-Fairway) gave a brief floor hazing to Cox, a freshman carrying his first bill on the House floor. Rooker asked Cox about the bill’s potential to speed up the need for shared services agreements to be implemented, bringing up a hypothetical shark infestation of sewer systems.

“We know the event of a disaster of a Sharknado we need immediate response,” Rooker said to laughs.

Cox assured Rooker and his colleagues that his bill would speed up local government response time to fend off shark takeovers.

“It would allow them to do it with greater efficiency,” Cox said to laughs.

Rep. John Alcala (D-Topeka), the ranking minority member of the House Local Government Committee, praised the bill for its potential cost savings. He noted that while fiscal analysts could not provide an exact estimate of the cost savings, lawmakers were briefed that it would have a long-term savings.

“Being an old local government guy this bill is a great bill,” Alcala, a former city councilman, said. “This bill allows us to streamline contracts.”