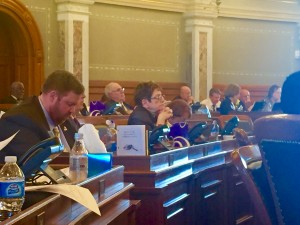 An effort by Kansas lawmakers to pass an omnibus bill piecing together a new tax plan and school funding plan was defeated Monday.

The state House of Representatives voted 32-91 Monday to defeat a measure that would have set a new statewide tax policy, along with using the state’s income tax as a dedicated funding source for public schools. Supporters said the measure would help lawmakers draw their annual session to a close and allow for more transparency in school finance, while opponents objected to the bundling of the two issues and to vouchers being included in the school finance plan.

“It is a funding mechanism that is dedicated to K-12, it is also one of our most stable sources of funding,” Appropriations Committee Vice Chairwoman Erin Davis (R-Olathe) during the debate.

Lawmakers, on Day 108 of the annual session, have been grappling with a new tax plan for the state, a state budget and developing a new school finance plan. The school finance plan is meant to replace the two-year-old block grant school funding mechanism, which the state Supreme Court ruled unconstitutional. The Supreme Court has also ruled for more funding for schools.

Davis said that the current plan, developed over the weekend, would show the court that lawmakers “took them seriously” in developing a stable funding source for schools. Rep. Kristey Williams (R-Augusta) said that the plan would allow for greater transparency in education funding, noting that residents will now know that all of their income taxes are dedicated to schools. The remainder of state government would be funded through other taxes and fees.

“I want our constituents to understand how it is paid,” Williams said.

The debate centered largely on the issue of bundling the tax plan and school finance together, along with the inclusion of the voucher plan in the school finance bill. Gov. Sam Brownback (R) has been a strong supporter of expanding school vouchers, saying that he would like it in the final plan in order to sign it. Opponents of vouchers have said that the plan would take money out of the public schools in the state.

Opposition to the legislation came from a broad base of House members, including conservatives, moderates and liberals. Rep. Melissa Rooker (R-Fairway), who has been a top advocate for education funding in the Legislature, said that she would vote against the package because of the bundling of taxes and school finance together. Rooker had helped craft large parts of the new school funding formula.

House Education Committee Vice Chairwoman Diana Dierks (R-Salina) said that lawmakers should be voting specifically on school finance and not on a bundled package.

“We owe it to our kids to pass the bill that the budget committee spent hours carefully considering,” she said.

Rep. John Whitmer (R-Wichita), one of the most conservative House members, said that the bill would tie the hands of lawmakers in the future.

“How will we be able to advocate and vote to lower income taxes ever again if we tie it to school funding,” he said.

The school finance portions of the bill are likely to return to the state House as early as Monday evening, as a conference committee voted Monday afternoon to have the education component run separate from the tax plan.

Rep. Ed Trimmer (D-Winfield), the top Democrat on the House K-12 Education Budget Committee, argued against the school finance plan, saying that the plan would cause automatic hikes in property taxes annually and would cause issues with the vouchers. Trimmer said that private schools would not be helping at-risk students but rather seeking to improve sports programs.

“Watching what’s happening the last few years, the private schools don’t want the at risk kids who don’t perform well,” Trimmer said. “They want the good athletes or the kids who are in gifted and talented programs.”