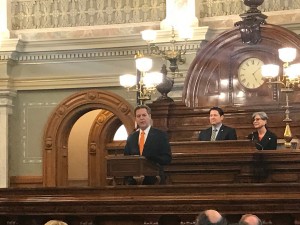 The Senate voted 22-18 to pass the tax bill, which had easily passed the House of Representatives earlier this week. The legislation would eliminate the state’s pass through tax cut for LLC owners, along with raising taxes on married couples earning between $30,001 and $100,000 from 4.6 percent to 5.25 percent and taxes on those making over $100,000 at 5.45 percent. The top tier is a percentage point lower than it was before the 2012 tax cuts. The plan was largely favored by Democrats and moderate Republicans and opposed by conservatives.

“This bill does not solve Kansas’ budget problem. It is the best start we have seen in four years. But it does not address our borrowing from the bank of KDOT or KPERS, nor does it address our school finance needs,” Sen. Lynn Rogers (D-Wichita) said in an explanation of vote. “I appreciate adding the third bracket and closing the LLC loophole. However, the weight of the bill is still on the backs of middle class families. Many of us campaigned on a platform of ‘fixing Topeka.’ Kansans overwhelmingly asked us to work together. I was sorely disappointed in yesterday’s behavior. I am willing to support this as the best we have today. But I warn us all, we will have to return to this chamber to readdress our fiscal state.”

The legislation now heads to Gov. Sam Brownback (R) for his signature or veto. Brownback has been critical of repealing the tax cuts in the past.

The Senate vote came after two hours of debate amongst senators, with many arguing against the hike saying that it would hurt working and middle class residents. The argument of the working class tax hike has been used by Democrats who opposed the plan.

The tax cuts have been a point of contention in Kansas politics since their adoption in 2012, with the state seeing a decline in revenue in that period, with a rise in spending. The state has regularly seen monthly revenue collection fall below estimates, with monthly budget cuts becoming a regular thing.

The tax cuts were a top issue in the 2016 election, which saw more Democrats and moderate Republicans elected to the Legislature. Many of the new legislators have also pledged to raise spending for schools and transportation.

The Senate tax action came on the same day that the House voted to approve a bill to plug the state’s $346 million budget hole in the current fiscal year. The spending cut bill now heads to the Senate.

The Senate’s move came a week after the Senate abruptly canceled a session dedicated to a tax and current year budget plan formed by that chamber, with moderate Republicans opposing cuts to education spending. The moderate Republicans argued that they wanted to see a tax plan adopted before addressing the current budget.

The Senate debate lasted longer than the House debate on the bill earlier this week, with senators spending over two hours on the legislation, while House members spent a few minutes on the bill with no debate.

The tax bill has garnered opposition from Republican gubernatorial candidate Wink Hartman, who called on Brownback to veto the move. Hartman has said that lawmakers should focus on spending, including looking to adopt recommendations from an efficiency study that lawmakers commissioned in 2015.

“I’m extremely disappointed by the Legislature’s decision to pass the largest tax increase in the history of Kansas and I’m encouraging the governor to veto this misguided tax-hike,” he said. “There is something fundamentally wrong with asking Kansas families to pick up the tab for Topeka’s spending problems.