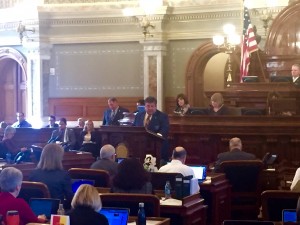 House members praised the bill – which would include more community based treatment programs – as a way to more effectively treat juvenile offenders and reduce recidivism. The bill includes changes from the Senate version of the bill, including retaining a fixed amount of community based group home beds around the state and addressing community supervision.

Finch said that juvenile offenders need to be given more chances and not to be treated as adults. He noted that many juvenile offenders can likely not be prosecuted and are likely just “doing dumb things.” He said that keeping the offenders out of detention facilities would allow for low risk kids to stay at home and receive treatment in a familiar environment, thus reducing recidivism.

Finch talked about his own childhood when he and three friends did a “dumb thing as teens. He did not go into the details of the incident but said the county attorney “showed mercy” on the group and did not pursue criminal charges. He said that all four of the group went to college and are all leading professional lives. He said that prosecutors need to have that flexibility and be able to not have juveniles going into a detention facility.

He noted that brain science has shown how the brain develops.

“We know that the human brain is not fully developed until the age of 26/27 and the last part that develops is the part that controls decision making,” Finch said.

Rep. Boog Highberger (D-Lawrence), the top Democrat on the House Corrections and Juvenile Justice Committee, said that the bill would likely continue the trend of reducing juvenile arrests in the state. He said the next thing that was needed was to reduce juvenile placements in detention centers, which he said had Kansas at ranked sixth in the nation for such placements.

“This may be the most significant piece of legislation that this body addresses this year,” Highberger said. “It is a major change. It involves a leap of faith but one we need to make.”

Several lawmakers spoke of the work of the House Corrections Committee on the issue and working to amend the Senate bill in to one that would garner support from various interest groups including law enforcement officers. The Kansas District Attorneys Associations switched from opposed to neutral following the House amendments.

Rep. Steven Becker (R-Buhler), a former district court judge, noted that while the executive board of the District Court Judges Association remained opposed to the bill, many judges around the state were now in support.

Rep. Greg Lewis (R-St. John) talked about the need to keep the community group homes in place and praised the Corrections Committee for keeping 50 beds open in the state. Lewis specifically spoke of a group home in Pratt – which is in his district – and the work of that specific facility. Lewis has previously spoken out on the House floor to keep the Pratt home open, including during a budget debate earlier this year.

Lewis said that by closing the homes, the state and judges would lose a “tool” to address the juveniles. He said that at the Pratt center, the juveniles work and do chores and attend classes. He said they form a family like bond and remain close to the home’s administrator long after leaving.

He also said that in his conversations with judges, he said many judges wanted to have the homes remain an option, saying that the judges at times do not want to send the kids back to their own homes.

“Some of these homes are so broken that there is no way a judge can send them back,” Lewis said, citing abuse and drug use at the homes the juveniles come from.

While bill specifies 50 beds to remain statewide, it does not specify which homes will remain open, leaving the decision to the state Department of Corrections and Juvenile Justice. Lewis, though, said he believed that the Pratt home’s record and 11 beds will make it one that will stay open.

Kansas lawmakers have been tackling prison and juvenile justice reform for several years, including a bill currently in the Legislature to increase prison credits and likely reforms to promote new vocational training programs. Last year, the state House Transportation and Public Safety Budget Committee expanded a pilot program in Wyandotte County that will allow for more community based juvenile treatment programs, along with making the detention centers more “home like.”

During the debate on last year’s plan, House public safety budget writers noted that the money invested in the expanded program will lead to new costs savings. They said the funds for the expansion were coming from savings from the pilot program.

Finch made similar comments Friday, noting that the juvenile justice reforms contained in the bill will likely provide cost savings for the state long term. He said the funds could then be reinvested into other juvenile justice programs. Finch said that lawmakers were being asked to produce a road map this year but would need to fund it again next year to keep the program going.

“If we are too scared to set the road map and then fund it, it will be to the detriment of our kids,” he said.

Finch also said the bill contains provisions to continue to study data on juvenile offenders, along with creating a new juvenile justice oversight panel for the state. He said that lawmakers will continue to monitor the program and likely make tweaks next year.

Finch closed the debate by reminding his colleagues that children need to be given second chances. He quoted verse 13:11 from the First Letter of Paul to the Corinthians from the Bible.