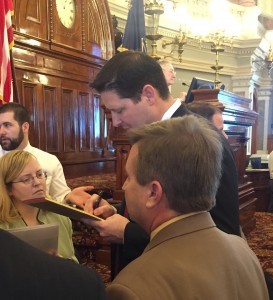 After adding an amendment to make the selection process more transparent, Kansas lawmakers advanced legislation Tuesday that would give the governor more names to consider for district court judgeships.

The state House of Representatives gave preliminary approval to legislation that would increase the amount of names that district court nominating commissions would send to the governor for each vacancy. The bill though faced vigorous floor debate over a Democratic amendment that would require public disclosure of the judicial applicant names and providing for open public meetings of the commissions.

“This amendment shines the bright light of day on the folks who apply for these judgeships,” Rep. John Carmichael (D-Wichita) said of his transparency amendment.

The Carmichael amendment, which passed 77-41, applies solely to applicants for district court judgeships across the state and does not impact applicants for the state Court of Appeals and state Supreme Court. Under the terms of his amendment, the local nominating commissions would have to disclose the names of the applicants, along with holding most meetings, including discussions of the candidates and a vote on recommendations to the governor, in public. Meetings to discuss the financial disclosure reports of applicants, along with applicant background checks from the Kansas Bureau of Investigation would be conducted in private.

The amendment comes in the middle of a protracted fight in Kansas over judicial selection. Earlier this year, House members defeated a proposed constitutional amendment that would have eliminated the state’s judicial nominating commission for the state Supreme Court and allowed the governor to nominate a candidate of their choosing with state Senate confirmation. Several years ago, lawmakers adopted legislation doing away with the nominating commission for the Court of Appeals.

Carmichael said the main bill and testimony in the House Judiciary Committee on judicial selection from Kansas Chamber of Commerce President Mike O’Neal, who urged transparency in the process, led to his amendment. The bill would increase the amount of nominees for district court judgeships from a minimum of two or maximum of three for each vacancy to a minimum of three and a maximum of five for each vacancy. Carmichael said the change would allow governors more opportunity to find district court judges – who handle trials around the state – that fit their ideological leanings.

“The effect of increasing the number of names sent to the governor is to give the governor more discretion to select,” Carmichael said. “The more names is more opportunity for governors, whether present or future, to select a judge of their own ideology.”

“This was never looked at in committee,” Carmichael said. “I will personally vote against it but I will leave it to the will of the body. We have committees.”

Kansas House Democrats have been offering a series of floor amendments this year on issues that are likely to come up in this year’s campaign.

Rep. Scott Schwab (R-Olathe) questioned Carmichael on whether opening up the names of applicants would reduce the number of applicants. He said that many applicants may not want their current employers to know they were looking for a judgeship. He also said attorneys might be reluctant to be publicly known to be seeking a judgeship for fear it could cause clients to head towards another attorney.

“We may lose good applicants and it’s hard to get them since we don’t pay them that great,” Schwab said.

Carmichael said that Schwab’s question was the reason that the transparency was needed.

“If you are a practicing lawyer who wants to sneak behind your bosses back to be a judge, then you aren’t ready for a district court judgeship,” Carmichael said.

Rep. Ron Ryckman Jr. (R-Olathe) told the House about his previous service on the nominating commission in the 10th judicial district, saying that the commission had voluntarily disclosed the names of the 20-25 applicants for each vacancy and had public meetings. Ryckman said he did not realize the practice was the commission’s decision and not state law.

Ryckman noted that the commissioners in his district would each call references for each of the applicants and then share the information in commission deliberations. He asked Carmichael if those would be open or closed sessions. Carmichael said under the terms of his amendment those would be open to the public, along with any discussions about past criminal history of an applicant that was not part of the KBI background report.

Carmichael stressed that while Ryckman’s panel was transparent in its discussions, it is not required around the state.

“It is not in state law,” he said. “Some conduct in the fashion you suggest, others in other ways.”