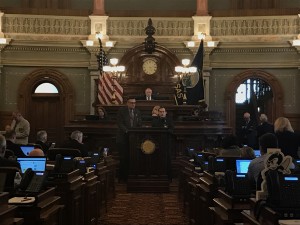 Kansas lawmakers set the state on track to be the 20th in the nation to condemn a movement for companies to boycott Israel.

The state House of Representatives voted 99-13 and the state Senate voted 36-3 to pass legislation that requires companies that do business with the state not to participate in boycotts of Israel. The legislation is in response to the boycott, divest and sanction movement from pro-Palestinian groups that are seeking for Israel to end its occupation of the West Bank and Gaza Strip, give full equality to Arab-Palestinian citizens of Israel and allow Palestinian refugees to return to their property. The passage came after a legislative conference committee made adjustments to a Senate amendment

“I am honored on the 50th anniversary of the reunification of Jerusalem to ask for the passage of this bill,” House General Government Budget Committee Chairman Bill Sutton (R-Gardner) said.

Wednesday is recognized as Jerusalem Day in Israel, marking the reunification of the city following the Six Day War in 1967.

The conference committee changed an amendment from Sen. Tom Hawk (D-Manhattan) that would allow the state secretary of administration to allow for a waiver of the law for when it is “not practicable” or “not in the best interest of the state.” Sutton said that the conference committee took out the “best interest of the state” saying that the wording was vague.

The movement to stop the Israeli boycott movement has grown in the United States, with 19 states passing legislation or resolutions condemning the boycott movement, including bills to prohibit companies that do business with the state from boycotting Israel. These states include New York, Illinois and California. The Ontario Legislative Assembly in Canada has also opposed the movement, along with the Democratic Party, the Republican Party and the European Union.

Rep. Boog Highberger (D-Lawrence), who has been a leading opponent of the bill, said that he did not believe the bill was needed and said that the state Legislature lacked foreign policy experts. He told his colleagues that he wanted them to look at another event that occurred in 1967 instead.

“This is also the 50th anniversary of the occupation of the West Bank and Gaza Strip,” Highberger said, referring to Israeli military administration of the territories, which have been a central debate in the Middle East peace process.

While Israel withdrew troops from the Gaza Strip in 2005, the United Nations and several international non-governmental organizations continue to refer to the Gaza Strip as occupied by Israel. Former Israeli Foreign Minister Tzipi Livni used a 2008 speech to say that Israel is not occupying the Gaza Strip.

“When we start asking companies who do business with the state to sign certificates of political correctness then we are on a slippery slope,” Highbeger said.

Rep. Randy Powell (R-Olathe) disagreed with Highberger saying that the state does millions of dollars in trade with Israel annually and noted that Israel is the only democracy in the Middle East.

“Israel is the only democracy in a region of the world that is against Israel. It is a strategic business partner,” Powell said. “They are a strategic alliance in the Middle East.”