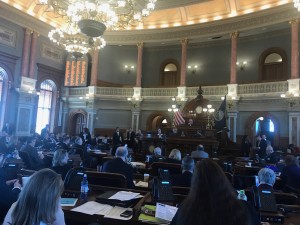 Kansas lawmakers have advanced a bill that would allow farmers to grow industrial hemp in the state.

The state House of Representatives gave preliminary approval Friday to legislation that would create a research program with farmers on industrial hemp and then give permission to the state Department of Agriculture to approve those farmers for future growth of the plant. The passage came amid debate over the economic impact of industrial hemp and any mixing of the crop and marijuana.

“Kansas has great farmers and we’re losing them,” Rep. Willie Dove (R-Bonner Springs), who has been pushing industrial hemp legislation for a number of years, told the House. “The heritage that was so richly deserved is being lost. The young people don’t want to farm because there is no profit in it.”

Dove told the House that the bill would allow Kansas farmers to compete with other states that have allowed industrial hemp to move forward as a crop. The 2014 Farm Bill allows state governments permission to legalize industrial hemp crops.

Dove said that industrial hemp would fit into a crop rotation plan for farmers and that 30,000 products can be made from it. He said that the crop played a role in American history.

“Industrial hemp helped our colonies win independence from England and helped us win World War I and World War II,” he said.

The National Conference of State Legislatures said that 20 states have adopted research programs on industrial hemp and 16 states have legalized the crop.

Dove told lawmakers that during a fact finding mission to Michigan, he was talking to a car parts manufacturer originally from Kansas who wanted to open a plant in his native state but would need industrial hemp legalization in order to open. He said the manufacturer uses the crop to make car parts for Volvos and BMWs.

Rep. Greg Lakin (R-Wichita) told the House that he had discussed the bill with state Agriculture Secretary Jackie McClaskey who said that she opposed the bill. Lakin said that McClaskey told him that her agency was not prepared to implement this bill and was confused about the research component. Lakin said that lawmakers should reject the bill until the Agriculture Department was willing to give a go-ahead.

House Commerce, Labor and Economic Development Committee Ranking Minority Member Brandon Whipple (D-Wichita) told the House that when the committee heard the bill that McClaskey did not testify to the committee about the bill or send a representative to voice opposition. He said that there was no written testimony submitted by the Agriculture Department about the bill.

The House did adopt an amendment that would notify law enforcement about which farmers are involved in industrial hemp, to avoid any prosecution under marijuana laws.

Dove and other lawmakers told the House that there is a low THC count in industrial hemp compared to marijuana. Rep. Blake Carpenter (R-Derby) said “you have to smoke an acre to get high.”

The debate brought about several marijuana related jokes among lawmakers. Whipple who described the bill as a “great economic boon,” noted that Dove has researched many details on the policy to educate lawmakers.

“Dare I say thank you for getting into the weeds,” Whipple said.