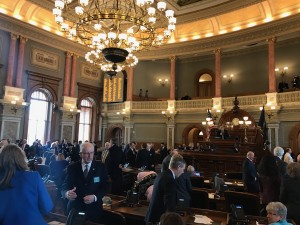 As Kansas lawmakers gathered for the first session since elections gave moderate Republicans and Democrats more seats in the state Legislature, inclusion was preached in a state House of Representatives that has divides among the parties.

The rise of moderate Republicans, to pull an almost equal amount of seats in the 85 member GOP caucus as conservative Republicans was reflected in the GOP leadership speeches during Monday’s reorganization session, as leaders preached for unity and for all voices to be heard. Lawmakers formally elected Rep. Ron Ryckman (R-Olathe), a conservative Republican, as the new speaker and Rep. Scott Schwab (R-Olathe) as speaker pro tempore, while Majority Leader Don Hineman (R-Dighton) and Minority Leader Jim Ward (R-Wichita) officially took office. The four were elected in party caucus meetings at the beginning of December.

“We believe that our priorities and goals can be met this session but only if we check our personal political agendas and seek to do what is best,” Ryckman said in his address to House members. “Come to work with an open mind and not a list of non-negotiables.”

Ryckman, who succeeds former Speaker Ray Merrick (R-Stilwell) who retired after four years, spoke mainly of the state and working together in this speech, rather than diving into policy specifics. He touched briefly though on the need to focus on the state’s budget deficit, the need to write a new school finance formula and job creation during his speech.

A former House Appropriations Committee chairman, Ryckman noted to his colleagues that he grew up in rural Meade and now lives in suburban Olathe and that he attended the state’s public schools and that his children now attend public schools.

“The families and issues that drive us to Topeka are different but the goals are the same. I know we must do better,” he said.

Hineman, a moderate Republican, stuck to many of the same themes as Ryckman, urging his colleagues to listen to each other and to work together. He noted that while members will disagree on issues, they should be listening to each other.

“There are skeptics that predict we will fail,” Hineman said. “There are others that hope that we fail. I hope that is not so.”

Ward, a liberal Democrat, spoke that lawmakers “have a state to restore to prosperity” and that lawmakers need to work together on that. Ward takes the leadership of House Democrats after a narrow 21-19 caucus win last month to unseat Rep. Tom Burroughs (D-Kansas City) as minority leader. Burroughs is now the top Democrat on the House General Government Budget Committee.

Ward, who has been an outspoken advocate for Medicaid expansion in the state in the past, noted that he is “humbled” to take on the new leadership post after 15 years in the House. He said that while the state has challenges, he believes that the state can move forward.

“Each of us has been called here because we want Kansas to be the best place to raise a family, start a business and live the American dream,” Ward said.

Schwab delivered an emotional address to his colleagues where he focused on the need for humility and that lawmakers need to remember the bigger picture at the end of the day. Schwab touched on his son, Caleb, who died following an accident at a Kansas City water park over the summer. He said that this weekend marked five months since the tragedy.

“When people fail to understand you, appreciate who you are and what you are doing. When your bill dies and your amendment fails, put it in perspective, let it go,” Schwab said. “Life is not worth wasting time.”

Schwab had noted that he is in his second stint in the state House and noted that the difference between his two stints was he did not have arrogance in his second stint. Schwab’s first stint ended following an unsuccessful run for Congress in 2006. He returned two years later. He urged freshman lawmakers not to be arrogant in their service.

Ryckman told his colleagues that Kansans sent them to Topeka to work on state issues and that he hoped they listened to each other and residents.