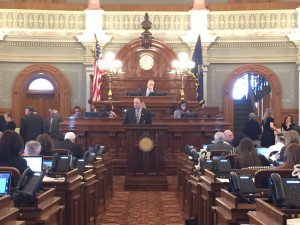 The state House easily passed a bill that would create a new system that would require giving notice to those who pay into various fee funds in the state if the money in the funds were to be moved to the state general fund. The move comes amid debate in the state over sweeping money out of fee funds to plug holes in the state’s increasing budget deficit.

“Fee sweeps require a double taxation on Kansas businesses,” Rep. Blaine Finch (R-Ottawa) said. “To pay into the fee fund and pay again when the fees are swept.”

The bill concerns fee funds the state has created for various professional regulatory boards, including for real estate, banking and barbers. The regulatory boards are self-funded by the fees, with the funds purposed for the professions to fund regulation. State officials have been taking funds out of the various fee funds to fund other aspects of state government, a practice that has predated the state’s 2012 tax cuts and current budget woes.

In 2009, several groups including those representing bankers, realtors and workers compensation officials filed a lawsuit in an effort to block fee fund sweeps.

Under the terms of the bill, state lawmakers would be allowed to move funds out of the fee funds but new transparency rules would apply. The regulatory boards would be required to inform all people and groups that paid into the fee fund for the previous 24 months about the proposed sweep of the fund, within 30 days of the proposal. The notice would allow those who paid into the fund to testify to lawmakers about the proposed sweep.

The bill would not stop fee fund sweeps and does not address the sweeping of other funds in state government, including the sales tax portion of the state highway fund.

Rep. Kathy Wolfe Moore (D-Kansas City), the top Democrat on the General Government Budget Committee, said that the fee fund sweeps were making it tougher for the regulatory boards to address setting fees.

“What has happened over many years is these fee funds are swept and then what often happens is the fees need to be increased when they could have decreased,” Wolfe Moore said.

“We are likely not to stop this,” Wolfe Moore said. “But this will provide greater transparency.”