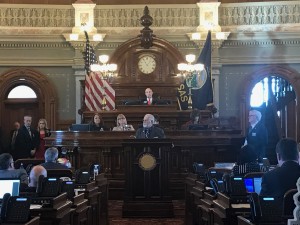 Attempts by Kansas House Democrats to bring school finance and gun safety bills to the state House floor were stymied Friday by Republicans.

The state House of Representatives defeated two motions made by House Minority Leader Jim Ward (D-Wichita) to bring the state’s school finance bill and a bill to ban guns on college campuses and hospitals to votes. Republicans said that the bills will come at another point in the current legislative session, while Ward argued that there is no more time.

“This may be your only chance,” Ward said when he pushed for the school finance bill to come up for debate Friday.

Ward’s attempt to bring the school finance bill came as he motioned to pull the bill up for immediate debate, circumventing House Speaker Ron Ryckman (R-Olathe) and House Majority Leader Don Hineman’s (R-Dighton) power to determine the House agenda. Ward has previously used similar motions to bring Medicaid expansion up for a House vote. The House K-12 Education Budget Committee voted a school finance bill out of committee earlier this week but it has not been brought before the full House for a vote.

Ward and legislative Democrats have been calling for an immediate vote on the school finance plan, which is needed satisfy a state Supreme Court ruling saying that the current block grant funding plan for education is unconstitutional in the state. The school finance issue, along with a new tax plan and a budget are the top three issues that Kansas lawmakers continue to grapple with as the state’s annual legislative session continues past the normal 90-day mark. Friday marked the 95th day of the session, with 100 days budgeted for this year.

The House voted 39-77 to defeat Ward’s motion on school finance, with Rep. Stephanie Clayton (R-Overland Park) being the only Republican to vote with Democrats to bring the bill up. Ward’s motion was non-debatable.

Ward used an amendment to a consumer protection bill as his attempted vehicle to force a vote on a gun ban. Current law requires public colleges, hospitals and mental hospitals in the state to allow concealed carry unless security measures are put in place as of July 1 of this year. The state’s colleges, hospitals and mental hospitals have been seeking an exemption to the law and several bills to force a floor vote on the issue have been defeated in committee. The state Senate voted earlier this week to send a similar bill back the Senate Ways and Means Committee.

“It is the ultimate consumer protection issue,” Ward said of his amendment.

The House Rules Committee ruled unanimously that Ward’s amendment was not germane to the main bill, which largely covered robocalls and consumer protections for members of the military. Ward then appealed the committee’s decision.

House Federal and State Affairs Committee Chairman John Barker (R-Abilene), whose committee handles gun issues, told the House that he has received assurances from Ryckman and Hineman that a gun bill will be coming up for a vote this year. He said that negotiations remain ongoing. Barker, a former Rules Committee chairman, said that he doubted the germaneness of the bill.

The House voted 72-42 to side with the Rules Committee and rule Ward’s amendment out of order.

Ward said that he has not been assured of a debate on the issue. He said that if he received the assurances he would not be pushing the amendment.

“This is Day 95 of our session, this is the 18th day of the veto session,” Ward said. “I stood here two months ago and tried to bring a gun safety bill above the line and I was promised it would come. When will we have that debate?”