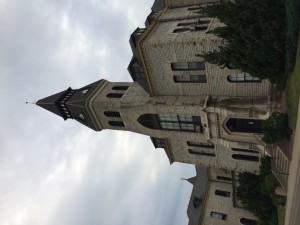 A group of Kansas lawmakers have introduced legislation that would create a new grant program to fund collegiate sports programs for students with disabilities.

The bill – introduced earlier this week – would create a new voluntary tax check-off program to fund a matching grant program to create new intercollegiate adaptive sports programs at colleges around the state. The bill starts with wheelchair basketball programs through July of 2017 and then can fund other athletic programs.

“It is a mechanism that allows people to make contributions and put more money into our universities while expanding opportunities to our students,” Rep. Brandon Whipple (D-Wichita), who is leading a bipartisan coalition of 16 lawmakers with Rep. Blake Carpenter (R-Derby) in sponsoring the bill, told The Celock Report.

Whipple stressed that the funding for the grant program would come from the tax return check-off and not cost the cash strapped state money.

“No money from the general fund,” he said.

Rob Egan, the president of the American Collegiate Society for Adapted Athletics and a Kansas native, has been pushing for the adoption of the legislation in his home state. Egan told The Celock Report that the program would allow for students with disabilities to “engage in a healthy and active lifestyle while earning a college degree.”

Egan said the program would allow for Kansas colleges to create new athletic programs, including competition around the country while helping the students. He said the start with wheelchair basketball comes from the sport being the most prominent for disabled athletics nationally, but said more possibilities exist.

“Wheelchair basketball is the most prominent and probably the most possible because that’s where most opportunities lay at the college level,” Egan said. “We could also see programs in wheelchair tennis, which has a few college teams and growth in that area expected, or even in something like power soccer.”

Power soccer is a form of the sport that involves the use of motorized wheelchairs.

Missouri has a similar program in place for students with disabilities.

Egan said the program is needed to provide new opportunities for students with disabilities. He noted that with the positive benefits found in athletic involvement at the collegiate level, it would benefit to have the expansion.

“Studies have recently shown that students who compete in athletics are more likely to earn a degree, more likely to get a job, and are likely to earn more money over the course of their careers,” Egan said. “We need to expand this opportunity to students with disabilities also. So many great values are taught in the realm of athletics, and it’s my belief that for many of these potential student-athletes, this program will be their portal to an education and to a degree, which will allow them to be independent and self-sufficient adults.”

Whipple said that the program would benefit athletes and has the potential to serve as an economic development engine for Kansas.

“There is a population out there that fall under the Americans with Disabilities Act and are some of our best and brightest thinkers,” Whipple said. “If there are universities in Kansas that want to create inclusive program for students, students will come here. We want them to come to Kansas and stay here and raise families here and build our economy.”