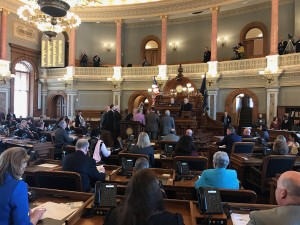 The Kansas House of Representatives killed an amendment to end the death penalty in the state.

The House voted to uphold a decision by the House Rules Committee that a floor amendment to end the death penalty was not germane to a bill related to new civil action for those wrongfully convicted of a crime or imprisoned. The amendment’s sponsor argued that there was a connection between the two issues, noting that other states have seen those wrongfully convicted sentenced to death.

“I’ve waited six years to stand in the well and speak to this issue,” Rep. Steven Becker (R-Buhler), the amendment’s sponsor, said. “For six years a bill has sat in committee and never came out of committee.”

Becker said the House Judiciary Committee held a hearing on the death penalty last year and the testimony from those speaking with ending the practice in Kansas was “powerful.” He noted that other states have had issues of addressing those wrongfully convicted who were put on death row. He said that he wanted to avoid that occurring in Kansas.

The House Rules Committee had ruled that Becker’s amendment did not fit with the bill since the bill addressed civil actions related to wrongful conviction and not with the death penalty or addressing criminal sentences for those wrongfully convicted. Becker challenged the committee’s ruling but the House voted to sustain the ruling.

Rep. Boog Highberger (D-Lawrence) spoke in favor of Becker’s amendment saying that other states have had issues with executing those who are wrongfully convicted.

“If we do not have absolute certainty we should not impose the absolute penalty,” Highberger said.

Becker, a former judge, argued that the death penalty has not been used in Kansas since 1965 and that keeping it in place was costing the state money in appeals for those who are sentenced to death.

“We’re always looking to save money, this is the way to do it,” Becker said. “The cost of keeping someone in prison for life is significantly less than the cost of execution. We have not executed someone in Kansas since 1965 and yet we continue to pay for it.”

The 2014 ruling played a role in that year’s retention election for several state Supreme Court justices. That year’s retention election saw the incumbent justices returned to office with unusually narrow margins for such elections, with most of the no votes coming from the Wichita area, where relatives of the Carr brothers’ victims had led a campaign against the justices.

Becker, who stressed that he believes that eliminating the death penalty would side with the pro-life beliefs of many lawmakers, said that he wanted to bring the issue up as a floor amendment because it hasn’t come up in the six years he has served in the House.

“After six years please understand I am a little desperate to speak to this issue,” he said.