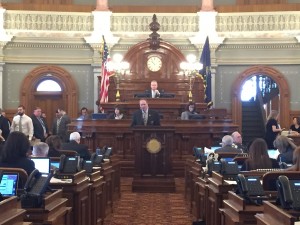 The Kansas state House speaker dramatically ousted two committee chairs Tuesday after a failed attempt by them to bring gaming expansion up for immediate debate, leading one to resign.

House Speaker Ray Merrick (R-Stillwater) fired House Corrections and Juvenile Justice Committee Chairman John Rubin (R-Shawnee) and Rules and Journal Committee Chairman John Barker (R-Abilene) at the close of Tuesday’s House session. The move followed an attempt by Rubin at the beginning of the roughly two-hour session to circumvent Merrick to force an immediate debate on a gaming bill and a proposed amendment from Barker to expand gaming in the state.

Rubin announced his immediate resignation from the House following his ouster as a chairman.

While Barker and his committee ruled Rubin’s motion out of order following extensive debate, Merrick announced that the changes were tied to the gaming maneuver.

“Today there was an attempt to manipulate the House Rules and pull a bill out of committee despite a hearing on the issue in House Appropriations scheduled for Wednesday. This is a complex issue,” Merrick said in a statement. “There is the possibility that expanding gaming in Kansas could result in the state being forced to pay over $100 million to the current operators of the state owned casinos. An opinion on the legal details has been requested from the Attorney General and we are currently waiting on his legal perspective. This isn’t a decision we should take lightly at any time, but especially in light of these circumstances. The Appropriations Committee will give this issue a fair hearing and will allow both sides to make their case. At this time and with a very heavy heart I am compelled to make the following committee changes:”

Rubin had attempted to bring a bill back to floor relating to charity gaming regulation that Merrick has moved to the House Calendar and Printing Committee on Monday. Rubin had said that Merrick was violating House rules by moving the bill off the House General Orders sheet without seeking a House vote. The bill in question had previously passed the state Senate and a House committee.

Rubin’s intent was to force an immediate debate on a bill that would offer Barker a vehicle to expand gaming via amendment. Barker’s proposed bill is scheduled for the House Appropriations hearing on Wednesday.

The Rules Committee – which is traditionally viewed as an arm of the House speaker and leadership – held a lengthy floor meeting on Rubin’s motion. The Celock Report has learned that House Majority Whip Willie Dove (R-Bonner Springs) was seen on the floor attempting to corral votes to override the Rules Committee if Barker and the panel ruled that Rubin’s motion was in order.

Immediately following the move, Rubin told reporters in the House press gallery that he would resign immediately. Rubin had not planned to seek reelection this year. Rubin’s early departure does set up Johnson County Republicans to tap a successor to serve the remainder of his term.

Rubin’s departure from the top of the Corrections Committee removes from the panel a leading advocate for criminal justice reform in the state as those issues have been gaining attention. Tuesday’s moves represent a win for Pauls, who became a Republican in 2014 following over two decades in the House as a Democrat. She was awarded with the Fed and State chairmanship earlier this year and now takes on the most committee leadership roles of any House member. She is a former ranking minority member of the Corrections Committee.

Merrick has carved out a role as a forceful speaker who is not afraid to oust dissenters from committee posts. Late last year he ousted several moderate Republicans from the House Health and Human Services Committee due to their support for Medicaid expansion. Merrick has also removed moderate Republicans from the House Education Committee in 2014 and 2015 due to disagreements on school finance. In late 2014, Merrick removed Rep. Virgil Peck (R-Tyro) from the chairmanship of the House Transportation and Public Safety Budget Committee after Peck unsuccessfully challenged Merrick for the speakership.

Rep. John Rubin (R-Shawnee) changed his mind about resigning from the Legislature and was present for Wednesday’s House session.