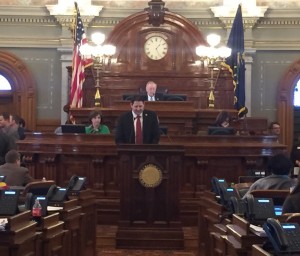 Following a debate centered on Medicare and school finance, the Kansas House of Representatives passed the state’s budget bill Wednesday.

The House voted 69-53 to advance a budget bill that includes pay hikes for corrections officers and state investigators, a new protection for the state’s Medicare program, a renewed cap on transportation bonding and changes to the state economic development program for one county. The passage comes as lawmakers had to plug a multimillion hole in the two-year budget passed last year.

“This maintains our unmatched commitment to KPERS and invests in our corrections officers and mental health,” House Appropriations Committee Chairman Ron Ryckman Jr. (R-Olathe) said on the House floor.

Much of the debate centered on a provision in the final budget proposal that would prohibit the state from privatizing Medicare or diverting Medicare funds to other programs should the federal government give permission for a multistate health care compact that Kansas joined in 2014 to take effect. Ryckman said the proposal – which sunsets in 2017 – was a way for lawmakers to reassure senior citizens about the health care program.

“This is mainly to reassure to our seniors that they will be protected,” Ryckman said.

House Democratic Agenda Chairman Brandon Whipple (D-Wichita) questioned Ryckman on the Medicare provision asking why the language was needed when lawmakers had been previously told that the health care compact would not allow for changes to the Medicare program. He noted that the provision in the budget was only for the length of the budget.

“My concern with this is we’re doing enough to address the problem,” Whipple said. “Not to solve the problem.”

Lawmakers entered in to the health care compact in 2014, but the compact – which was proposed as a way for states to exit the Affordable Care Act – will not take effect until legislation is enacted in Washington, which is considered unlikely while President Barack Obama is in office. On Tuesday, lawmakers rejected an amendment to another medical compact bill that would have taken the state out of the health care compact. During the Tuesday debate, Rep. Brett Hildabrand (R-Shawnee), who developed the initial compact bill in 2014, said that the funds could not be diverted to other programs.

Under the terms of the compact, Kansas would receive Medicare funds as a block grant. Democrats and senior advocacy groups have expressed concern that the shift would cause heath care funds being diverted to other government programs or that the compact could cause the privatization of Medicare.

Rep. Jim Ward (D-Wichita) questioned Ryckman on why the budget contained $50,000 for lawmakers to retain an attorney in the school finance court case. Last week, the state Supreme Court ordered lawmakers to develop a new school finance formula by June 30 or all schools in the state would be shutdown. Ward wanted to know if lawmakers were intending to force a “constitutional crisis.”

Ryckman said the attorneys would provide advice on how lawmakers should proceed in the court case and with the funding decision.

“We’re hiring attorneys to give us the information on the best way how to proceed,” Ryckman said.

Ryckman said the budget adopted Wednesday did not address the school finance ruling since he and other budget writers did not “want to hold government hostage” to the school funding debate.

Ryckman also discussed the economic development provisions of the bill, which include a new barrier on STAR bonds being issued for projects in Wyandotte County, which addresses the proposed American Royal project in Kansas City. The STAR bonds prohibition of Wyandotte County was a compromise developed by the budget conference committee after the state Senate last week adopted an amendment from Sen. Jim Denning (R-Overland Park) which would have stopped STAR bonds statewide. Lawmakers have expressed concerns over the program – which is run by the state Department of Commerce – and have proposed additional legislative oversight.

The Denning amendment caused concern over a pending $140 million project in downtown Salina, that would have STAR bonds, would be placed in jeopardy. Intense lobbying over the weekend from Reps. J.R. Claeys (R-Salina) and Steven Johnson (R-Assaria) and the Salina business community, persuaded budget writers to save the Salina project. The final budget conference committee on STAR bonds referenced the Salina project specifically.

Ryckman told the House Wednesday that the House Taxation Committee plans to take up STAR bond reform this year through other legislation.

Rep. Greg Lewis (R-St. John), a moderate Republican, questioned Ryckman over provisions in the budget report that would shift the state’s juvenile justice programs from group homes to home based treatment programs. Ryckman said that the changes were part of a juvenile justice reform program.

Lewis noted that one of the homes was in his rural district and said that he believes the switch would not be in the best interest of the state or the children involved.

“I have concerns about closing all of these homes. Some of the homes that these boys are coming out of are so broken,” Lewis said. “The boys do not want to go home and the parents do not want them to come home.”

Last year, legislators endorsed a plan to expand an alternative juvenile offender treatment program from Wyandotte County to other parts of the state. The plan included less group home placement and changing the nature of group homes to be more “home like.”

At the time, lawmakers said it was done to address the recidivism amongst juvenile offenders.

“Congregate livings for adolescents in the kinds of behaviors they have are not home like,” House Transportation and Public Safety Budget Committee Vice Chairman Russ Jennings (R-Lakin) told The Celock Report last year. “You have the offenders and put them in one place you have the possibility of a contagion effect. It is more likely of creating more problems.”

Democrats largely expressed concerns with the budget, saying that it not addressing long term issues in the state.

“This budget robs Peter to pay Paul and gives the illusion we’re solving problems when we are not,” House Minority Whip Ed Trimmer (D-Winfield) said.