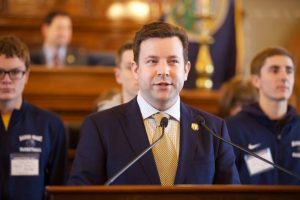 Kansas legislative budget writers beat back a proposal to cut a funding boost for two state aviation programs out of the budget.

“If anyone thinks I am against this program that’s not where I was going,” Rep. Clay Aurand (R-Belleville), the sponsor of the amendment, said. “I can think of a lot of things that $5 million can do in education funding.”

Aurand said that he wanted to take the budget increases out of the proposed budget and have lawmakers come back to the issue later in the process. He said that he could find other ways to spend the money than on the two aviation programs and noted that they were helping to fund the programs in order to support the expansion of Spirit.

Aurand also hinted that he wanted to see the budget invest in programs with more of an impact on his northern Kansas district, noting that while aviation was a big industry in the Wichita area, hospitals were more important in his district, close to the Nebraska border. He noted that the Appropriations Committee did not embrace new investment in a nursing aviation program at Emporia State University earlier in Thursday’s meeting.

“Aviation in south central Kansas is big,” Aurand said. “The biggest employer in my town is the hospital and we need nurses.”

The budget hike for the two aviation programs was proposed by former Gov. Sam Brownback (R) in his budget proposal last month. Gov. Jeff Colyer (R), who succeeded Brownback on Jan. 31 has endorsed the proposal.

House Transportation and Public Safety Budget Committee Chairman J.R. Claeys (R-Salina), a top legislative supporter of the aviation industry, said any move by the committee to take the money out of the budget would hurt Kansas’ overall position in the aviation industry and generating new aviation jobs.

“People on the outside see the actions we take, they will see what we do in this committee today and will see the lack of support,” Claeys said.

Claeys said that the committee needed to leave the funds in the budget and showcase that the state supports aviation. He noted that other states are fighting for aviation jobs and that any action by lawmakers to take the money out of the budget, would hurt the state long term.

Rep. Kristey Williams (R-Augusta) noted that while she is not a huge supporter of tax incentives, she believes this investment was “critical” to the state.

“It is difficult to recruit 1,000 high skilled jobs. In this case we know that one of the incentives was to fill those jobs by educating potential employees,” she said. “I cannot think of an incentive to think for the state of Kansas to give than an education piece.”

Rep. Brenda Landwehr (R-Wichita) noted her city’s history in the aviation sector and the importance of keeping the industry in the state. She noted that NIAR is a 15-year-old program and has had a success rate.

Landwehr noted though that Wichita has been losing aviation jobs to other states, noting that Oklahoma gave incentives to Boeing to move to their state.

“It is vital to us coming back to be the air capital of the world in Wichita,” Landwehr said. “Boeing, Cessna, Learjet all started in Wichita.”

Aurand received bipartisan support for his proposal. Appropriations Committee Ranking Minority Member Kathy Wolfe Moore (D-Kansas City) told the committee that she did not believe this was the right time for the committee to endorse the proposal. She said she wanted more study of the issue and for lawmakers to revisit it at a later date.

Aurand told his colleagues to ignore the call from Claeys saying that he did not think that industry leaders would leave the state or see the committee’s move as a lack of support. He said that the industry was engaging in fear tactics.

“They are expert in pitting state vs. state in tax credits,” Aurand said.

Claeys told the committee he was stunned that a boost for an educational program would be interpreted as anything else.

“I never thought I’d see the day that we’d be discussing education as a corporate handout,” he said.