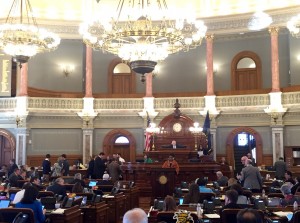 Kansas lawmakers Monday held a hearing on legislation that would increase the amount of information that abortion providers have to provide in advance.

The state House Federal and State Affairs Committee took up legislation that would require abortion providers to disclose the names of who would perform the abortion, the year of the doctor’s medical degree, years of practice, any malpractice claims, disciplinary actions, clinical privileges at hospitals within 30 miles of the clinic and state of residency. Supporters of the measure say it would increase information for the patient while opponents say it is unnecessary since current state laws allow for information to be disclosed.

“What this bill does is offers appropriate and necessary disclosures on behalf of the women,” Steve Brunk from the Kansas Family Policy Alliance told the committee. “This is a tweak and is not groundbreaking.”

Brunk and Kathy Ostrowski, the legislative director of Kansans for Life, told the committee that the law was needed in order to bolster the state’s 20-year-old right to know law for abortions. Under the current law, women who are seeking abortions must acknowledge receiving information about the procedure 24 hours in advance of the abortion. Ostrowski said that while information is provided, women are rarely told who the doctor is who will perform the abortion and much of the information is kept hidden in small type on consent sheets. Under the terms of the bill all information provided would need to be in black ink on white paper in 12 point Times New Roman font.

“We want to make sure that information is readily available and not hidden,” Brunk said. “What I’d want to know is does this doctor have admitting privileges to a hospital if the surgery goes awry.”

Opponents of the bill described it as a “solution in search of a problem” and cited potential constitutional concerns, noting a recent U.S. Supreme Court ruling said that abortion providers could not be singled out from other medical providers in certain cases.

Elise Higgins from Planned Parenthood Great Plains said that her organization follows all appropriate state laws regarding advance consent and notification. She said that the forms her office uses for providing information to women seeking abortions are printed in 11 point Times New Roman font and no one has expressed concerns about font size or color.

Higgins noted that the state Board of Healing Arts has done a good job in regulating abortion notification and providers in the state and those looking for information on providers could go to the board’s website.

“It is either redundant with additional requirements on the Board of Healing Arts,” she said. “It is also designed to undermine confidence in a safe and existing medical procedure that has a less than one percent risk of complications.”

Ostrowski expressed concerns that residents do not know the jurisdiction of the Board of Healing Arts.

Rep. Melissa Rooker (R-Fairway) questioned why abortion providers were being singled out and not potentially midwives who perform births in homes. She noted that a normal pregnancy could have complications during birth, noting that was her case in her first pregnancy. Brunk said that an abortion and giving birth were different.

Rep. Francis Awerkamp (R-St. Mary’s) said his wife used a midwife for three of their children and that during the several months of preparation his wife discussed the safety issues of the birth and what would happen in case of an emergency with the midwife. He said that the time period allowed for the information to be shared a comfort established.

Rep. John Wilson (D-Lawrence) said that the requirements to know the year that a doctor graduated from medical school was “ageist.”

Rep. John Whitmer (R-Wichita) said that people had the right to know how old their doctor was and how long of a commute they had. Whitmer also accused current abortion providers in the state of hiding their doctors backgrounds from the public.

“I have no idea that I am going to have an invasive procedure performed on me by a 70 year old who drove a long distance that morning,” he said. “What are you hiding, why are you not making it readily available. I have a right to know before I show up that morning if a 78 year old who drove in from out of state.”

Whitmer also said that he has heard of doctors who do not have backgrounds in women’s health performing abortions if they had not performed well in their original specialty.

Rooker said that she believed the bill was designed to target one set of doctors.

“It looks punitive and harassing a particular set of providers,” she said.