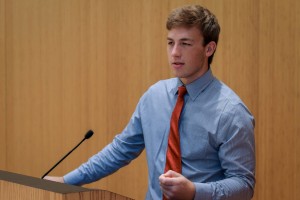 While most high school seniors are worried about classes, college applications and who to ask to the prom, 17-year-old Jordon DeGroote is looking for votes in his campaign to serve on the local school board.

DeGroote, who begins his senior year at West Windsor-Plainsboro High School in New Jersey next month, recently announced his candidacy for a seat on the West Windsor-Plainsboro Regional Board of Education, seeking to become the Garden State’s youngest school board member. DeGroote said he is running in an effort to bring a student voice to the governance of the local school system. He is challenging Board of Education Vice President Michele Kaish.

“It would be good for the students to have a stronger connection to their elected officials,” DeGroote told The Celock Report.

DeGroote said that he does not believe that student opinion is being taken into account by the board in the decision making process. He pointed to the board’s decision to change the high school’s summer curriculum program as one example. He said under the previous program, students could take multiple classes in the summer in an effort to advance through classes. The new policy limits students to one class per summer and one class per subject during their high school career.

“They said the environment is too hyper competitive,” he said. “But the reality is the vast majority of students wanted to modify the curriculum to what they wanted to study.”

On his website, DeGroote also outlined a platform that would include allowing student input to teacher evaluations, increasing unscheduled teacher evaluations and studying the start time of the school day. New Jersey Gov. Chris Christie (R) recently said that he is open to looking at school start times, an issue that has been developing interest around the country.

This is not DeGroote’s first involvement in politics. Earlier this year he was elected American Legion Boy’s State governor of New Jersey and he has interned for Assemblyman Reed Gusciora (D-Trenton) and the British American Security Council. DeGroote is active in the high school Model United Nations Club.

DeGroote said that so far he has received a positive reception to his candidacy. He plans to use social media to promote his candidacy, noting that he wants to increase voter turnout amongst high school students. The November 2015 election is likely to be a low turnout one in New Jersey, with races for the state Assembly topping the ballot statewide.

DeGroote will turn 18, the minimum age to hold a Board of Education seat in New Jersey, weeks before the November election.

Kaish told The Celock Report that she is proud to serve on a Board of Education in a school system that has provided opportunities for a high school senior to develop an interest in public service.

Kaish, who was first elected to the board in 2012 and is seeking her second term, said that she “respectfully disagrees” with DeGroote about the board not taking student opinion into account in the decision making process.

“Every decision I make is focused on the best interests of all students and all learners. My compass is always pointed in that direction,” Kaish said. “That said, any decision that a school board member has to be made in context of the big picture.”

Kaish said that she is open to studying the issue of televising board meetings, but would want to know the costs of such a program first. She said the board is transparent, noting that meeting minutes and agendas are posted on the school district website, along with voting records.

Kaish, a West Windsor resident for over 20 years, has been volunteering in the local schools for 18 years. Two of her children have graduated from the school system, while her son is a rising sophomore at West Windsor-Plainsboro High School.

In addition to serving as the board’s vice president, Kaish chairs the board’s administration and facilities committee and is liaison to the district’s PTAs and education foundation. She noted that her experience has prepared her for a second term.

“I believe that over the last three years, I have successfully represented the interests of all the stakeholders in our district,” she said. “I look forward to serving another term on our school board.”

DeGroote would not be the first high school senior to be elected to a school board seat in New Jersey. In 2013, Chase Harrison, an 18-year-old senior at Millburn High School, was elected to a one-year unexpired term on the Millburn Board of Education, defeating the board’s vice president. Harrison did not seek reelection in 2014.

The practice has occurred in other communities nationally, including in 2005 when 18-year-old Shane Brinton, a recent high school graduate, was elected to the North Humboldt Union High School District in California. Brinton would go on to serve on the Arcata City Council and as Arcata’s mayor.

Both Brinton and Menendez both sought board seats based on experiences from their student days. Menendez has said that the school district requiring honors program participants to pay for materials prompted his candidacy, while Brinton said his desire to upgrade the sex education program helped spur his candidacy.

While Menendez, Zikas and Brinton went on to higher office from the school board, DeGroote told The Celock Report that right now he is focused on running for the school board and not on a political future. He said that if elected he plans to attend a college in New Jersey so he can serve the full three-year term.

Teen elected officials in other offices have been common. In 2005, 18-year-old high school senior Michael Sessions was elected mayor of Hillsdale, Mich., while John Tyler Hammons was 19 when he was elected mayor of Muskogee, Okla. in 2008. Both served one term. Former Smith Center, Kan. Mayor Trey Joy was 19 when he was first elected in 2009. Joy resigned in 2014, a year into his second term.

In Maryland, 19-year-old Brandon Paulin was sworn-in as mayor of Indian Head in May, becoming Maryland’s youngest ever mayor. West Virginia Del. Saira Blair (R-Martinsburg) was 18 when she was elected to the state Legislature last year, while 19-year-old New Hampshire state Rep. Rio Tilton (R-Seabrook) won his seat in a special election last month. Former Ohio state Rep. Derrick Seaver was 18 when he won his seat in 2000. Seaver would retire after three terms in order to attend college.

DeGroote said that he is prepared for the challenges of serving and of being in the position to be his teachers’ boss if elected. He noted though that he does not believe the board is the ultimate boss of the school system.

“Who is really at the top of this chain is the constituent,” he said. “Everyone is beholden to the voter.”