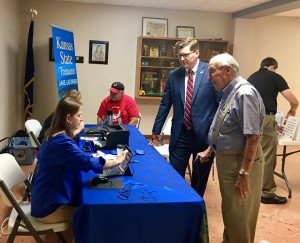 The nation’s youngest statewide official has made the increased use of social media a key part of new outreach efforts for his office.

Kansas Treasurer Jake LaTurner (R) has used his office’s social media accounts as central to his efforts to promote the state’s unclaimed property program, along with programs for educational savings accounts and savings accounts for the disabled. LaTurner, who took office this spring, said that he was looking for cost effective ways to promote outreach and found the number of Kansans on social media to be an effective way.

“It makes sense for us to modernize the treasurer’s office and meet people where they are and save money while we do it,” LaTurner told The Celock Report.

Most of LaTurner’s social media usage has been focused on the three main programs administered by his office, the unclaimed property program, the Learning Quest educational savings accounts and the ABLE savings accounts for parents with disabled children. LaTurner has used social media to promote the three programs, along with his current 105 county tour, which is centered largely on the unclaimed property program.

LaTurner’s social media strategy has included promotion of the county tour, which has served as a way for the new statewide official to meet constituents and to promote the unclaimed property program. On social media, LaTurner has promoted where he and his staff will be, along with putting photos of him and staffers working with residents. LaTurner has also posted pictures of him and his staff in local restaurants.

LaTurner’s social media usage includes videos of him and treasurer’s office employees explaining the unclaimed property program and the other programs run by his office. In promoting the new ABLE accounts, which were passed by lawmakers in 2015, LaTurner posted a video of himself and residents on Facebook to promote ABLE.

“Just over the past 28 days we’ve reached over hundreds of thousands Kansans on Facebook. We’ve had thousands who have engaged with our posts. We’ve had hundreds of thousands of video views,” LaTurner said. “These are numbers that I would argue that are not seen in the traditional way of doing things, not just in the treasurer’s office but across state government. The average cost to reach 1000 on FB is 25 cents; the average cost to reach a 1000 people on television is $7. Saving the taxpayer dollars forces me to go down this path.”

LaTurner’s predecessor, U.S. Rep. Ron Estes (R), had used a variety of means to promote the services of his office, including newspaper advertisements and some social media work. He had also engaged in several tours of the state’s 105 counties during his six years in office. LaTurner said that he is trying to increase the work the office had been doing.

LaTurner, a former state senator, was appointed to the treasurer’s office earlier this year following Estes’ election to Congress. The nation’s youngest statewide official, the 29-year-old LaTurner said that his age was not a primary reason he decided to make social media a cornerstone of his outreach. He noted that the fastest growing segment on Facebook are those over the age of 50.

LaTurner is not the only unclaimed property administrator or state treasurer who has made social media outreach a key to their work. Kentucky Treasurer Allison Ball (R), the nation’s youngest woman in statewide elective office, has active personal and official Twitter feeds, much of which are dedicated to promoting her office’s services, including unclaimed property and her state’s ABLE program, along with fiscal transparency and promoting communities Ball visits around Kentucky. On June 30, Ball used her official Twitter account to promote her social media use for Social Media Day.

The Ohio Department of Commerce, which runs that state’s unclaimed property program, uses their Twitter account to promote a location of unclaimed property staffers around the state. The statewide tours for unclaimed property are not uncommon nationwide with former Wisconsin Treasurer Dawn Marie Sass (D) manning booths in shopping malls statewide during her tenure, while New York State Comptroller Tom DiNapoli (D) and his predecessors have set up a popular booth at the state fair in Syracuse annually. LaTurner’s office historically has a booth at the Kansas state fair in Hutchinson.

LaTurner said that he has heard good feedback from state residents during his travel and that people have said they have come to his unclaimed property events after hearing about it on social media. He said that he believes increased social media outreach can grow the programs, including the ABLE.

“It has been a real positive reaction that we’re seeing. People are saying that they had no idea they had unclaimed property, they had no idea that the ABLE Act existed or Learning Quest,” LaTurner said. “The Legislature has tasked this office with administering these three initiatives. Over time I think we’ll see more growth out of these programs.”