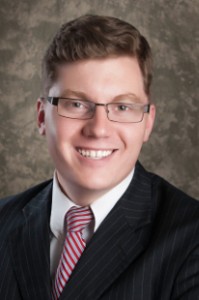 Kansas Gov. Sam Brownback (R) has named a 28-year-old state senator as the new state treasurer and the youngest person to hold a statewide office in the country.

Brownback announced Tuesday that state Sen. Jake LaTurner (R-Pittsburg) is his pick to succeed Republican Ron Estes, who is giving up the treasurer’s office after winning a special election to Congress last week. LaTurner, who will hold the office until the end of Estes’ current term in January 2019, becomes the youngest person to hold a statewide office in the nation, along with being the nation’s youngest state treasurer.

“Kansans want leaders who reflect the values of our great state,” Brownback said, noting that LaTurner has served with “dedication and integrity” in the state Senate.

LaTurner said on Tuesday that he’ll run for a full term as state treasurer in 2018. He officially takes office when Estes is sworn-in to the congressional seat next year.

LaTurner said that he is proud to take on the treasurer’s office. As state treasurer, LaTurner will be in charge of the state’s unclaimed property program, college savings program and the ABLE program to create savings accounts for the disabled. LaTurner said that the office is “an exciting place to be” and noted that he wants to grow on Estes’ record in the office.

Citing his own college education at Pittsburg State University, LaTurner noted that he was looking forward to working on the college savings program.

“As a guy who did not grow in a family with much money and took out loans to attend Pittsburg State University, advocating for families to save for their children’s education is exciting,” LaTurner said.

As treasurer, LaTurner will also serve as a member of the Kansas Public Employees Retirement System Board of Trustees.

LaTurner was first elected to the state Senate in 2012, becoming the youngest person elected to the Senate in state history. Former Sen. Garrett Love (R-Montezuma), who was appointed to his seat in 2010, is the youngest senator in Kansas history. Prior to his election to the Senate, LaTurner served as a district aide to U.S. Rep. Lynn Jenkins (R-Kan.), herself a former state treasurer. LaTurner’s grandfather had served as the mayor of Galena.

LaTurner was a bit of a surprise pick for the treasurer’s office with much of the speculation centering on state Republican Party Chairman Kelly Arnold. Arnold, who serves as Sedgwick County clerk and a KPERS board member, has been mentioned as a likely statewide candidate.

LaTurner had been mentioned as a potential candidate to succeed the retiring Jenkins in Congress but is opting instead to seek a full term as treasurer.

LaTurner’s appointment now forces Senate President Susan Wagle (R-Wichita) to name a new Federal and State Affairs Committee chairman, one of the most powerful chairmanships in the Senate. Republican committee members in LaTurner’s district will now appoint a new senator to serve until a November 2018 election to fill the remaining two years on his term.

During the press conference announcing his appointment, LaTurner briefly touched on his age.

“Having young adults involved in government is something I have advocated for years,” he said.