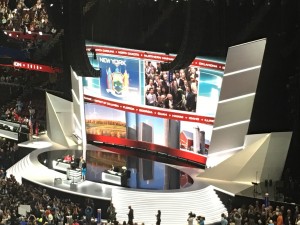 With a family background in local politics, the Republican National Convention’s youngest delegate said the convention’s mix of political and non-political speakers has been one of the highlights for him.

“I had the opportunity to travel with my father to 2012 in Tampa,” Salm told The Celock Report, of his desire to seek the at-large delegate slot at the Virginia Republican Convention. “I was not able to go to the convention hall but went to many of the events. I wanted to get the full convention experience.”

Salm, a rising senior at Broadwater Academy in Exmore, Va., has extensive experience in politics both in and out of school. He has volunteered on several campaigns for U.S. Rep. Scott Rigell and volunteered in 2013 for the gubernatorial campaign of Ken Cuccinelli and the attorney general campaign of Mark Obenshain.

In school, Salm has been the junior class president and a member of the Leadership Council. He has also been a delegate to the Model General Assembly in Virginia and American Legion Boys State, where he was elected political party chairman during a convention. He has also attended the High School Leaders Council at the University of Virginia’s Sorenson Institute.

Salm said that he started the campaign undecided between Donald Trump, Ohio Gov. John Kasich and Florida Sen. Marco Rubio. He said that after meeting Trump when the New York real estate developer traveled to Norfolk for a campaign stop led him to back Trump, an endorsement he made in October.

“When you meet him and interact him he is charismatic,” Salm said. “He has a presidential presence about him.”

Salm was one of two Trump supporters to win at-large delegate slots in Virginia during the state convention earlier this year.

Trump’s background in business was a key reason Salm said he wanted to get behind him.

“With his business related background I believe he is the best person to get our economy back on track,” he said.

Salm said that one of the highlights of the convention so far has been to meet other delegates from across Virginia. He said that he has been able to learn more about the state from them and gain better relationships during this time. He said he has enjoyed “all of the energy and enthusiasm of the convention” as well.

Salm praised convention organizers for putting together a convention program that has included a mix of elected officials and those from outside of politics. In particular he praised two speakers who were not in elective office.

Salm said he believes the convention has done a good job at uniting the GOP following a bruising primary battle. He noted standing ovations on Tuesday for House Speaker Paul Ryan and New Jersey Gov. Chris Christie and said he is looking forward to the convention cheering on Trump following the nominee’s acceptance speech on Thursday night.

Looking to his own future, Salm said he is not taking a political career off the table, but it is not an immediate focus. He said he is focused more on the college admissions process and a future career in business or finance. He did say that he plans on joining the College Republicans when he gets to college.

“I think it is important for people of our age to get involved in the process because this is our future,” he said of youth political participation. “We have a long way to go and it is important to have leaders in positions to get our country back on track.”