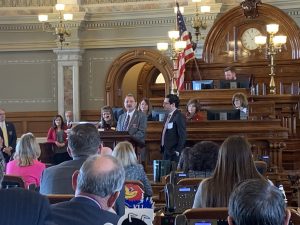 A Kansas lawmaker announced his resignation Monday, following the diagnosis of brain cancer.

Rep. Greg Lewis (R-St. John) told fellow lawmakers that he would be leaving the Legislature effective Friday due to a diagnosis following being lightheaded on Christmas Day. Lewis used his farewell address to lawmakers to touch on his advice to lawmakers and to recount his medical journey.

“God has granted me great peace in all that has happened to me,” Lewis said. “The source of that joy is the lord.”

Lewis, who was joined by his wife and son during his farewell remarks, told lawmakers that he had been helped in part by telemedicine legislation that he and fellow lawmakers enacted several years ago. He recounted being stricken while in Kansas City for Christmas and then heading to a nearby hospital thinking he had had a stroke.

Lewis said that the telemedicine bill allowed him to consult with a doctor in Denver. He said that since his diagnosis with cancer, he has had three surgeries and is currently receiving chemotherapy and radiation treatment.

Lewis, a farmer who has specialized in agricultural issues in the House, talked to lawmakers about how he did not seek out to serve in the Legislature, but is glad that he took entered state government, citing his service as “an honor, privilege and great experience.”

Lewis, a former school board member and moderate Republican, was first picked by a special Republican district convention in March 2015, to fill a vacancy caused by the resignation of former Rep. Basil Dannebohm (R-Ellinwood). Lewis was elected in 2016 and 2018.

Lewis currently serves on the House Agriculture, Local Government and Agriculture and Natural Resources Budget Committees. He is a former vice chairman of the House Government Technology and Security Committee.

Republican precinct committee members in Lewis’ district will now convene in the coming weeks to select a new legislator to serve the remainder of Lewis’ term, which expires in January 2021.

Lewis passed on words of advice to other members of the state House.