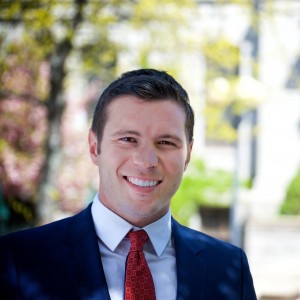 Highlighting his energy and desire to make his city more attractive for new residents, a 25-year-old small business owner is preparing to become the youngest mayor in New York State.

Oswego Mayor-elect Billy Barlow (R) captured 56 percent of vote earlier this month, besting two candidates over twice his age, including the sitting mayor in order to become the city’s next chief executive. Barlow, a lifelong Oswego resident, has served as a city councilor for the last two years. He takes over as New York’s youngest mayor from 28-year-old Ithaca Mayor Svante Myrick (D), who has held the title for the last four years.

“I thought after serving on the council for over a year, I thought what was missing most in City Hall was leadership and management,” Barlow told The Celock Report. “There was a lack of communication and lack of management from the mayor’s office.”

Barlow was the endorsed Republican candidate in the election, defeating Democratic Oswego County Legislator Amy Tresidder, 60, and Mayor Tom Gillen (D), 66. Oswego Democrats had endorsed Tresidder over the one-term Gillen, who decided to seek the job as a write-in candidate. Gillen received 97 votes in his bid for a second term.

Barlow said a desire to spur economic growth in Oswego led him to seek a city council seat two years ago and was behind his desire to run for mayor this year. Oswego, like many cities in Upstate New York, has been suffering from diminishing population and businesses. Barlow said that coming from Arizona State University during college he saw more businesses closing downtown and an increase in blighted properties.

“I remembered the downtown businesses closing and saw the change year to year,” he said. “I thought the city was heading in the wrong direction.”

During his two years as a city councilor, Barlow worked to push through a home improvement tax incentive, which will allow for homeowners to rehabilitate their property without an immediate large hike in their property taxes. Barlow said this will allow for homes to improve around the city, helping for the city’s long-term growth. He also worked to require that landlords be current in their property taxes before receiving a rental license from the city, which he said will help the city’s financial situation.

Barlow said that the leadership skills he’s picked up in his family business are a base for his desire to serve as mayor. The mayor-elect’s family runs Barlow’s Concessions, which runs food concessions at fairs, festivals and sporting events in Central New York and Western New York. While in college, Barlow expanding the business to Arizona, an expansion his parents continue to run in the winter months. Barlow will continue to run the business’ concessions in Western New York while serving as Oswego’s part time $40,000-a-year mayor for the next four years.

Among the top goals Barlow has for Oswego is to create a code enforcement office to clean-up blighted properties and to address what he says is a city government that is not viewed as business friendly. Among the ideas he wants to address to streamlining the process to get building permits in the city in order to encourage downtown investment.

Barlow says that in the beginning of his mayoral campaign, he saw hesitation from residents about a 25-year-old seeking to lead the city. He focused on talking to the residents about his plans and sharing his energy and passion for the city, where he said he hopes to raise his family.

“My campaign focused largely on going door to door and speaking to individuals. I noticed some people were uncomfortable with someone so young running for mayor,” Barlow said. “When I came to their door and talked to them about my vision and my record they began to see me as an individual and not a number.”

Barlow’s desire to focus on economic growth is in line with what has driven a number of young mayors to seek office.

Barlow is not alone in being a young official in Oswego County or in the state. County Clerk Michael Backus (R), 31, is the youngest county clerk in New York State, being 28 when he was first elected in 2012.

Myrick was first elected Ithaca mayor in 2011 and reelected 2015 in the college town in New York’s Finger Lakes region. In Niagara County, 35-year-old Democrat Kyle Andrews is in his second term as county treasurer, having first entered politics as a 21-year-old student at Niagara University when he was elected to the county legislature in 2001.

In New York City, 27-year-old Ritchie Torres is the youngest city councilman, first being elected in 2013 at the age of 25. Torres succeeded fellow Democrat Joel Rivera, who became New York City’s youngest ever councilman in 2001 at the age of 22. Rivera served as the Council’s majority leader for most of his tenure. His first four years as majority leader was during the tenure of former City Council Speaker Gifford Miller (D), who was 32 when he became speaker in 2002. Miller, who was 26 when he was first elected in a 1996 special election, was the Council’s longest serving member when he became speaker, a quirk due to the city’s term limits law. Miller unsuccessfully sought the New York City mayoralty in 2005.

Forty-year-old Dutchess County Executive Marcus Molinaro (R) started his political career as the 19-year-old mayor of Tivoli, N.Y. in 1995. Molinaro held the mayor’s post for just shy of 12 years, serving concurrently as a county legislator for part of his mayoral tenure. Molinaro was elected to the state Assembly in 2006 before winning the county executive’s office in 2011.

While Molinaro has parlayed his youthful start as a mayor in to a two-decade tenure in various elective offices and speculation that he could one day seek the governor’s mansion, Barlow said he is not focusing on a long-term career but rather on city government in Oswego.