North Dakota Democrat Seeks To Be Youngest Member Of Congress 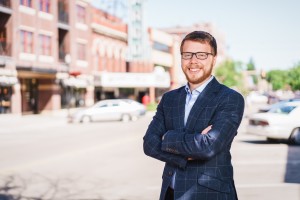 A former Democratic state legislator in North Dakota has announced his candidacy to unseat the state’s Republican congressman.

Former state Rep. Ben Hanson (D) entered the race against U.S. Rep. Kevin Cramer (R) Wednesday saying that he believes that the incumbent has not focused enough on agriculture and economic issues in the state, instead focusing on Republican talking points. Hanson, 30, could be the nation’s youngest member of Congress if elected.

“I don’t think our current congressman is doing a good job in looking out for our state and industry in our state,” Hanson told The Celock Report.

Hanson specifically pointed to Cramer not serving on the House Agriculture Committee as part of what he said is Cramer not focusing on North Dakota economic issues. He noted that the largely rural state needed to have its sole member of Congress serving on the agriculture panel, particularly as the federal government gears up for debate on the next Farm Bill.

“That will be very important to the North Dakota economy with the dra\ought currently happening in the western part of the state that is severely impacting our ranchers and our grain farmers,” Hanson said.

Hanson said that as North Dakota’s sole member of the House of Representatives, Cramer has “extra responsibility” to focus on the state’s economic issues, including agriculture.

Cramer currently serves on the House Energy and Commerce Committee, which handles a variety of legislation including bills covering energy, business, the environment, health, manufacturing and tourism issues. Energy has been a major issue in North Dakota with the oil and gas industry being a key economic sector in the western part of the state.

Cramer has previously served on the House Natural Resources Committee, which focuses mainly on federal land issues, including energy, and the House Science, Space and Technology Committee, which also has a focus on energy, along with the space program.

Hanson said that while Cramer serves on the Energy and Commerce Committee he does not see much work Cramer, a former state public service commissioner, has done on energy issues in the state. He said he would like to see more of a focus from the third term Republican on the future of the energy industry.

“I don’t know what you can point to on those issues. I cannot point to an individual bill. It’s not even so much that what he has done for industry or provide an incentive to them,” Hanson said. “He has not worked on funding federal government research into how we can move to the next generation of energy or research. I cannot remember a bill he’s sponsored to either foster or protect that industry for the state.”

Hanson said that one of the reasons he has decided to enter the congressional race was his admiration for North Dakota’s federal delegation while growing up. He noted that former U.S. Sens. Byron Dorgan (D) and Kent Conrad (D) and former U.S. Rep. Earl Pomeroy (D) – who served together from 1993 to 2011 – focused on North Dakota specific issues, including agriculture, rural affairs and economic issues.

The Democratic trio – known unofficially as “Team North Dakota” – routinely won when North Dakota voters were electing Republican presidents and governors. Dorgan retired from the Senate in 2010, being replaced by Hoeven and Conrad retired in 2012, being replaced by Heitkamp. Pomeroy was defeated for reelection in 2010 by Republican Rick Berg. Berg did not seek a second term in 2012 in order to unsuccessfully run for the Senate and was succeeded by Cramer.

“I grew up watching a Congressional delegation that I really admired and I thought they paid attention to the details of public service,” Hanson said. “I don’t see Kevin Cramer doing that. He is parroting a lot of national party points.”

Hanson noted that he wants to continue Dorgan’s work on the innovation economy in the state, including growing a technology corridor in the Red River Valley. He noted that while in the state Legislature he focused largely on technology policy and crafted policies relating to the testing of driverless vehicles in North Dakota. Hanson said that the driverless car testing is important to the state given the large amount of energy products being transported out of North Dakota.

Hanson also noted that during his tenure in the Legislature he was able to pass a campaign finance reform bill for North Dakota, which includes provisions for campaign finance disclosure and a ban on using campaign funds for personal use. The legislation came after the Center for Public Integrity in Washington named North Dakota as the most unethical state in the country in 2012, citing among other issues the lack of such laws.

Cramer’s campaign did not return a message left at his campaign office by The Celock Report seeking comment on Hanson’s candidacy.

Cramer, the co-chairman of the congressional Rural Broadband Caucus, notes in a recent press release that he recently joined a bipartisan group of members of Congress in urging the Federal Communications Commission in pushing for keeping three television white space channels in order to help increase rural broadband. Cramer also announced that earlier this month he participated in a House Agriculture Committee organized listening session in Minnesota relating to the Farm Bill.

Cramer is also promoting a variety of energy and agriculture related issues he has been working on in recent weeks, including a series of proposals relating to the legislation reauthorizing the Department of Energy that he recently submitted to Energy and Commerce Committee leaders. Cramer gave the same proposals to President Donald Trump late last year when he met with Trump during a Trump Tower meeting during the transition. At the time, Cramer was mentioned as a potential energy secretary in the Trump Administration. Among the proposals is merging the Environmental Protection Agency into the Department of Energy to create a new Department of Energy and Environment.

Cramer is also promoting his support for a driverless car bill that passed the Energy and Commerce Committee last month.

The Energy and Commerce Committee is one of the most powerful committees in Congress, handling a majority of congressional legislation. Members of the committee typically do not serve on other committees. A review of the Energy and Commerce Committee shows that 16 of the committee’s 55 members – seven Democrats and nine Republicans – serve on other committees. That includes U.S. Rep. Yvette Clarke (D-N.Y.) who also serves on both the Ethics and Small Business Committees, and U.S. Rep. Gregg Harper (R-Ky.), who is the chairman of the House Administration Committee. U.S. Rep. Cathy McMorris Rogers (R-Wash.) serves only on the energy panel, but also is the chairwoman of the House Republican Conference, the number four spot in the GOP leadership.

Hanson described the possibility of being the youngest member of Congress as a fun fact.

“I guess it is a fun trivia point. It is not something I am running on or running away from,” Hanson said. “It just happens to be there.”

Hanson said that the rise of young Democrats in the state is a coincidence and not part of a any plan by the party.

“There is no particular strategic plan to have certain people run,” he said. “It is up to the person to step up.”

Hanson, a commercial realtor professionally, served one four-year-term in the state House of Representatives, before being defeated in a GOP wave that swept the state in 2016. During his tenure in the Legislature, he served as the co-chairman of the House Democratic Caucus.

Hanson may not end up facing Cramer next year if Cramer decides to enter the race against Heitkamp, which has been mentioned. It is unclear if Cramer will seek the Senate seat or reelection.

Hanson said that he is not focused on voter perceptions of Heitkamp or Trump but rather on challenging Cramer. He noted that North Dakota has a history of electing Democrats to federal jobs. Heitkamp won her seat in 2012 at the same time that North Dakota voters elected Cramer, then Gov. Jack Dalrymple (R) and Republicans to other statewide offices and voted for Republican Mitt Romney for president.

“I am not running for president or Senate, I am running against Kevin Cramer and I am positioning myself as a replacement for Kevin Cramer and make the argument that he needs to have an early retirement,” Hanson said. “I know that historical ticket splitters that voted for past congressional delegations that differed from the president. We are not party stalwarts in North Dakota and vote for the individual.”