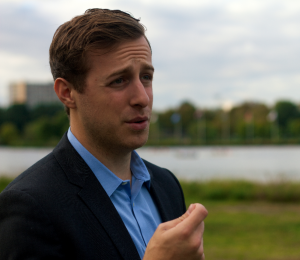 A 24-year-old Democrat is emphasizing his age as he seeks to unseat a member of one of New Jersey’s most powerful Democratic families from Congress.

Alex Law has launched a Democratic primary challenge to U.S. Rep. Donald Norcross (D-N.J.) in the state’s first district in the 2016 election. Norcross, who was first elected in 2014, is the brother of South Jersey Democratic leader George Norcross, who presides over a powerful party apparatus. Law says that the Norcross political operation is part of what led him to enter the race.

“We have some of the lowest voter turnout rates in the country,” Law told The Celock Report. “There is a level of political apathy with the machine that is astounding.”

Law said that the machine politics that has characterized South Jersey in recent years is what led him in to the race. He said that he sees his candidacy as a way to move the Camden region forward along with bringing a new voice to the table. He noted that Norcross defeated two opponents in the 2014 Democratic primary with only 18,000 votes of 200,000 registered Democrats in the district. The first district is a Democratic stronghold.

Law has gone all in to the race, quitting his job with IBM recently to campaign full time for the next year.

“Hopefully we make a difference by stopping this air of invincibility that the machine has,” he said.

Law is promoting a more progressive agenda from the moderate Norcross, who was a state senator for almost five years before going to Congress. He said that he wants to focus on raising the minimum wage, reform student loans and campaign finance, changing the nation’s marijuana laws and providing protection to the LGBT population.

Law noted that he wanted to focus on bringing more jobs to the Camden region, saying that Norcross has preferred using tax credits to lure businesses from the suburbs into Camden but there is no creation of new jobs. He said he would prefer spending the funds on creating small businesses in Camden, one of the nation’s poorest cities.

“We need to spend those dollars on incentivizing small business,” Law said.

Law was quick to describe Norcross as a “conservative Democrat,” saying that the incumbent had voted with Republicans often. Norcross’ brother, who presides over business and hospital interests in South Jersey, has had a close relationship with New Jersey Gov. Chris Christie (R) on a variety of issues, particularly related to health care.

Norcross, a long time union leader, first entered elective office in 2009 with his election to the state Assembly. He left the Assembly a week after he was sworn-in after his appointment to a vacant state Senate seat. He was elected to Congress last year to succeed former Rep. Rob Andrews (D-N.J.). Norcross quickly captured support from the South Jersey Democratic establishment when he announced his congressional candidacy.

Law was quick to point to Andrews’ record as well, noting a Washington Post report that showed that Andrews had introduced 646 bills during 23 years in Congress and not a single one had passed.

“Our district has not had a single bill passed that is written by a member since I have been alive,” he said.

Andrews argued to the Washington Post last year that many of his bills were incorporated into larger bills that did become law.

Law considered running for local office and the state Legislature but declined saying that he believed it would be tougher to beat a Norcross backed candidate for those offices than for Congress.

In New Jersey, state legislative seats and county offices have been viewed as more valuable at times than congressional seats due to the control state and county officials can yield over political appointments and contracts.

Law says that he is not making the congressional run in an attempt to build name recognition for a future run at the state or local level.

“I am about as competitive as a person as you meet in life,” he said. “I would not quit my job and commit two years of my life to something that is a vanity project. We believe there is a path to win.”

Law is not the first young candidate to make a challenge to a strong incumbent in a Democratic congressional primary in New Jersey. In 2004, then 27-year-old Iraq War veteran Steve Fulop unsuccessfully challenged then U.S. Rep. Bob Menendez, now a U.S. senator, in a Democratic primary for a Hudson County based seat. Fulop turned his loss to Menendez into a successful run for the Jersey City Council in 2005 and was elected Jersey City’s mayor in 2013. The now 38-year-old Fulop is considered a likely 2017 candidate for New Jersey governor.

Law, who will be 25 in time for the June 2016 primary, has made his 1991 birth a trademark of his campaign, with a billboard in the district, anchored in Camden and across the Delaware River from Philadelphia, touting his youth. He notes that his youth will help him reach out to voters and bring a new perspective to the district.

“I am a young candidate and that’s exactly what this district needs and what Congress needs,” he said.

Law is not the first young congressional candidate to promote his youth as part of his campaign. Last year, Democrat Dan LaVallee, then 26, played up his youth in his unsuccessful campaign in northwestern Pennsylvania, including responding to attacks saying he would be too young to serve. Missouri Secretary of State Jason Kander, the 33-year-old presumptive Democratic nominee in the state’s 2016 U.S. Senate race, highlighted his age when he announced his candidacy earlier this year. Kander was the nation’s youngest statewide elected official from 2013 to 2015.

If elected, Law would be one of the youngest members of Congress in the nation’s history. Currently Rep. Elise Stefanik (R-N.Y.) is the nation’s youngest member of Congress at the age of 31. There is a bigger push by younger members of Congress on both sides of the aisle to push policies impacting younger voters. Stefanik has launched an effort within the House GOP Caucus to reach out to younger votes, while Rep. Eric Swalwell (D-Calif.), 34, has been touring the country for the House Democratic Caucus to reach out to younger voters about issues, including student loan reform.

Law said that he is confident that he’ll be headed to Washington to take Stefanik’s honorary title of “Baby of the House”.

“We are in this race to win this race. We are putting all the chips on the table,” Law said. “I quit my job. I will be totally broke when this is over if I don’t win.”