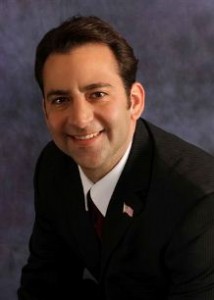 The new chairman of the Kansas House budget committee is planning to take a “very pragmatic approach” to the budget cuts the panel will be taking when lawmakers reconvene next month.

Rep. Troy Waymaster (R-Russell) told The Celock Report Thursday, minutes after his appointment was announced, that he expects a series of tough budget and management decisions facing budget writers. The state has a $346 million deficit in the current fiscal year and projected multimillion budget deficits for the next two fiscal years. In addition, lawmakers are expected to draft a new school finance formula next year, while addressing the future of the state’s 2012 tax cuts, which have contributed to the deficit.

“I’m excited about the position of appropriations chairman,” Waymaster said. “Some decisions will be tough. I am willing to take a look and accept those difficult choices ahead.”

With the tax writing panels charged with addressing revenue issues, Waymaster said he wants to focus on the spending issues. With the current fiscal year deficit at the top of the Appropriations Committee agenda, Waymaster said cuts will be coming to the current budget. But he stressed that the panel will be studying the entire spending plan closely in making the decisions.

“In order to balance the budget for this year, cuts will be made,” Waymaster said. “We will need to be pragmatic and methodical in those cuts. We are going to have to look at cuts.”

Waymaster said that he plans on asking the chairmen of the six budget committees in the House to begin immediately studying the budgets of the agencies covered by their committees to identify anything that can be done in the current fiscal years. He said the budget chairs will have to also identify long term spending issues within their agencies for the next two fiscal years when conducting the initial round.

The six budget committees conduct the initial review of agency budgets and draft initial budget plans in response to the governor’s spending proposals.

“I want to have that review implemented and see if there is anything that can be saved now,” Waymaster said of the directions that he’ll be giving the budget chairs. “Then look at 18 and 19”

With lawmakers expected to draft a new school finance formula in 2017 to replace the controversial block grants that we implemented as a temporary school finance measure in 2015, Waymaster said the education spending issue will play a huge role in budget writing. In a change from previous years, budgets for K-12 education and higher education will be handled by separate budget committees rather than one.

Waymaster said that he would like to see the Appropriations Committee review K-12 education spending but also keep in mind that any potential cuts made in the area, which constitutes much of the state budget, will have to pass muster with the state Supreme Court. The Supreme Court has ruled for increased education funding in the state in previous years.

“The only thing in the back of my mind is if we cut and the Supreme Court comes back with an order to spend more, that is counterproductive,” Waymaster said. “We need to be thoughtful on K-12.”

Waymaster said that he wants to start revisiting the government efficiency study that lawmakers received from the consulting firm of Alvarez and Marsal earlier this year. The study contained 105 recommendations, which the firm said could save the state $2.04 billion over a five-year period. Among the recommendations were changes to health insurance practices, consolidation of procurement and IT functions and changes to the state’s labor, leasing and printing operations.

Lawmakers conducted hearings and discussions of the efficiency study last year in the budget committees, but few pieces of legislation developed from the plan. Waymaster said that with lack of time in the 2016 legislative session preventing a detailed study of the A&M report, he wants lawmakers to revisit the plan’s recommendations in 2017, with an eye towards developing legislation and implementation plans.

Waymaster said he has asked the newly appointed Appropriations Committee vice chairwoman, Rep. Erin Davis (R-Olathe), to take the lead on the efficiency study. He said that Davis will be tasked with overseeing legislative review in the House of the study and working with the budget committee chairs on conducting reviews and developing a legislative response based on the recommendations. He said that in addition to the budget reviews, he expects the budget chairs to make the A&M report a top priority.

“That is one of the first things I am going to challenge them to work on,” Waymaster said. “So we can get those to the floor for a vote as soon as possible.”

Waymaster, who said that he is excited to work with Davis, said the two will be scheduling a meeting with the six budget chairs for before the legislative session kicks off Jan. 9.

Waymaster noted that he looks forward to working with Sen. Carolyn McGinn (R-Sedgwick), the newly named chairwoman of the Senate Ways and Means Committee, on budget issues. He said that with a broad mix of moderates and conservatives in the House and Senate Republican caucuses, he and the moderate McGinn will need to work closely and communicate closely with members to develop a spending plan that can pass.

The 39-year-old Waymaster takes the helm of the budget panel as he enters his third term representing a rural central Kansas district. Waymaster has spent the past two years as chairman of the General Government Budget Committee, which handles spending plans for the state’s elected officials and a variety of regulatory agencies.

Waymaster started his career as a fiscal analyst with Chrysler Financial, where he worked on credit issues and with dealers on management issues. He said that when he discussed the Appropriations Committee chairmanship with Ryckman he talked about his experience with Chrysler, and decisions he worked on regarding the merger between Chrysler and Daimler and the need to consolidate offices. Waymaster, who now helps run the family farm, was also an assistant vice president and branch center manager with UMB Bank in the Russell area, prior to being elected to the Legislature in 2012.

He said that having worked on challenges and tough decisions in the private sector, he is ready to take up public sector management challenges.

“I want to be a part of the solution. I want to be the one who spearheads that. I know will make some people unhappy,” Waymaster said. “But when I worked for DaimlerChrysler and we were consolidating offices across the United States and I was a zone manager in Kansas City and those were tough decisions that had to be made. I was willing to accept the ramifications of those decisions. We will have to make some kind of cuts to balance the books. I look forward to working with Senator McGinn.”