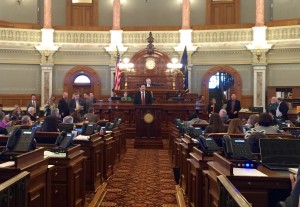 The Kansas House of Representatives voted overwhelmingly Thursday to give preliminary passage to a resolution calling on President Barack Obama not to send Guantanamo Bay detainees to Fort Leavenworth.

The House voted 105-12 to pass the resolution following a debate, which centered on potential security risks, patriotism and selling guns to those on the terror watch list. Obama has said he plans to close Guantanamo Bay’s detention facility and move the suspected terrorists housed there to a facility in the United States, with facilities in Colorado and South Carolina being mentioned along with Kansas. Both of Kansas’ U.S. senators, Gov. Sam Brownback (R) and the state’s congressional delegation oppose moving the prisoners to the state.

“What needs to be understood by every American and Kansan is that it is illegal to have these terrorists placed on American soil,” Rep. Tony Barton (R-Leavenworth) said during the debate, citing federal law on the detainees.

Barton said that Obama has been looking for a place to move the detainees since he promised to close Guantanamo Bay during this 2008 campaign. He said that other countries have refused to take the detainees, citing security concerns.

Among the concerns that have been raised by opponents of the move, is the possibility of terrorist groups trying to free those housed at the facility or attacking nearby cities. During the debate, House Veterans, Military and Homeland Security Committee Chairman Mario Goico (R-Wichita) noted that Leavenworth city officials have expressed those fears to his committee.

“We were told by the city of Leavenworth that it affects their economy,” Goico said of the detainees being moved to the military facility.

During the debate, Rep. Jim Ward (D-Wichita) offered an amendment that would have stripped the bill of its language regarding detainees coming to Kansas and replace it with a resolution saying that the state wanted to ban those on the terror watch list from being able to buy guns. Liberals have been pushing for the addition of the terror watch list to a gun-buying ban, but gun rights groups including the National Rifle Association have opposed the move. Opponents of the ban have said that the terror watch list is arbitrary and does not involve due process to add someone to the list.

Ward, who noted that no one in the state supports terrorism, said that every act of domestic terrorism since the Sept. 11, 2001 attacks has involved a firearm. Ward’s amendment was ruled not germane to the bill by the House Rules and Journal Committee.

Ward struck back at the committee and Rules Committee Chairman John Barker (R-Abilene) saying that Barker was trying to block measures he disagreed with from being debated. Ward then unsuccessfully appealed to the full House to overturn Barker and the committee.

During a speech about Barker, Ward seemed to point to what his frustrations are with the House Republican leadership and being in the minority party than his amendment being struck down. Ward has long been pushing for the state to adopt the Medicaid expansion, only to be stymied at every turn by GOP leaders who have said they do not support the expansion.

During the debate on Ward’s push to overturn Barker, Barton pointed to the concerns over the watch list, saying that some on the list are “not necessarily terrorists.” Ward received support from Rep. John Carmichael (D-Wichita) who said that lawmakers should be focusing on guns not on the president’s decisions.

During the debate, Goico and Barton noted that U.S. Army Command and General Staff College at Fort Leavenworth could be harmed by the detainees being located at the base. They said other countries said they would not send their military leaders to the college if the detainees are there. Goico said this would have an impact on Leavenworth as a community.

During the debate on the resolution, opponents questioned if it was needed. House Assistant Minority Leader Louis Ruiz (D-Kansas City) and Carmichael both noted that Nazi soldiers were housed at Fort Leavenworth during and after World War II. Ruiz said that there were no attempts by Nazis to break their troops out of the base during that time. Carmichael said that Kansans accepted the Nazis knowing the dangers.

“Kansans ran the risk of Nazis escaping and running across the prairie,” he said.

Carmichael said the patriotic thing for the state to do is to help the war on terrorism. He said that in the past Kansans have stepped up in times of war to help out at risk to themselves.

“This resolution is the antithesis of what a patriotic Kansan is. This resolution says we are not ready to take risks for our country. This says not in our backyard,” Carmichael said. “This says let someone else shoulder the risk. That concerns me greatly. I would suggest to you that the risk of a terrorist bombing occurring now 15 years after the World Trade Center remains high. It remains high throughout our nation. That does not mean that we as Americans are not ready to take risks in the battle against terrorism. This resolution is an example of cowardness on the part of the state of Kansas.”

Rep. Boog Highberger (D-Lawrence) said that he believed that the resolution was a “gotcha” bill aimed at Obama. He cited language in the resolution saying that Obama has “sought to weaken our standing in the world” as his reasoning. He cited poll numbers that show the United States being more popular in France, the United Kingdom, Germany and Japan under Obama than under former President George W. Bush. He said that U.S. popularity has dropped in Russia under Obama.

Barton said that the resolution was sending a message to Obama that Kansas did not want the detainees. He also said that the measure was greater than the impacted states.

“This is not just the problem of Kansas, Colorado and South Carolina,” Barton said. “Once these terrorists are brought on American soil, it is an American problem.”