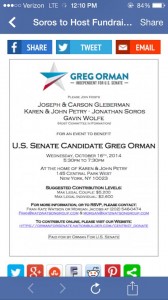 Soros is one of the co-hosts of the fundraiser to be held at the Central Park West apartment of hedge fund executive John Petry and his wife, Karen, who are listed as co-hosts. Joining the trio as co-hosts are investment banker Gavin Wolfe, retired Goldman Sachs partner Joseph Gleberman and his wife, Carson. Federal Election Commission records show that the co-hosts have donated to mainly Democratic candidates in the past, with several GOP donations from Wolfe. The fundraiser comes as Orman continues to say he has not decided which party he will caucus with in the Senate, with Republicans describing Orman as a Democrat in disguise.

The fundraiser comes a week after Politico reported that Soros and former New York City Mayor Mike Bloomberg (I) planned to get involved on Orman’s behalf. The invitation cites the fundraiser as being held on Oct. 16 but also identifies it as Wednesday.

Orman is challenging U.S. Sen. Pat Roberts (R-Kan.) in what has become one of the most competitive races in the country and could determine control of the Senate. Orman emerged as Roberts’ most serious challenger after Democrat Chad Taylor dropped out last month.

John Petry, who is hosting the event at his Manhattan home, is also involved in a series of education reform groups, including charter schools that have been at odds with teachers’ unions. The Kansas National Education Association, the state’s largest teachers union, has backed Orman.

FEC records show that both Petrys, Wolfe and the Glebermans have long histories in donating to Democratic candidates. These include donations to Orman’s brief 2008 Democratic U.S. Senate campaign for Roberts’ seat. Orman dropped that bid in favor of former U.S. Rep. Jim Slattery grabbing the Democratic nomination.

The FEC records for Wolfe, an executive with Bank of America, show that he has donated to Republican and Democratic candidates. The GOP donations listed were $1000 to former President George W. Bush in 1999 and $2500 to Mitt Romney’s presidential campaign in 2011, along with a 2010 donation for $2400 to Maryland GOP U.S. Senate hopeful Eric Wargotz who later dropped his campaign. Wolfe donated to Obama’s 2004 U.S. Senate in Illinois and donated $4600 to Orman’s 2008 Senate race, which was later refunded. Wolfe has donated $5200 to Orman this year, along with $2400 to a Democratic U.S. Senate hopeful in Illinois in 2009.

Joseph Gleberman’s donations have largely been Democratic with two exceptions according to the FEC records listed online. In 2003 he donated $2000 to Republican Jack Ryan’s U.S. Senate campaign in Illinois and in 2010 he donated $5000 to the Free and Strong America PAC, which was connected to Romney. Both Ryan and Gleberman had been Goldman Sachs executives, with Ryan dropping his 2004 Senate campaign against Obama following revelations from Ryan’s divorce becoming public. His donations have also included $2300 to Obama’s 2008 presidential campaign and a 1997 donation of $2000 to former U.S. Sen. Ted Kennedy (D-Mass.). Mr. Gleberman has a history of donating to Goldman Sachs PAC and donated to the 2000 U.S. Senate campaign of former New Jersey Gov. Jon Corzine (D), who is a former Goldman Sachs chief executive.

Carson Gleberman’s donations include $10,000 to the Democratic Congressional Campaign Committee in 2004, along with both of Obama’s presidential campaigns, Clinton’s 2008 campaign, Secretary of State John Kerry’s 2004 presidential campaign and Corzine’s 2000 Senate run.

Roberts has been quick to hit Orman on what he says are Democratic ties, noting that he believes Orman will be a vote to keep Reid as majority leader. Orman has declined to say who he will caucus with and during a debate last week said that he would not support either Reid or Senate Minority Leader Mitch McConnell (R-Ky.) for majority leader. Roberts’ campaign has been critical of the Soros fundraiser, citing Soros’ long-standing support for Democratic candidates.

“Greg Orman continues to hide the truth when it comes to his donors, his business dealings, his positions on issues, and even his party affiliation. He claims to be independent, yet he is pro-abortion, pro-amnesty, and is against repealing Obamacare,” Roberts campaign manager Corey Bliss told The Celock Report in a statement seeking comment on the fundraiser’s co-hosts. “He claims to oppose big money in politics, yet he has sought out the wealthiest Obama donors in America to save his campaign.”

John Petry’s involvement in politics has included longstanding work as a founder and board member of Democrats for Educational Reform, along with service as a board member for the Success Academy Charter School network in New York. He is a former board chairman for Success Academy and a former chairman of Education Reform Now, a education advocacy group. DER has long pushed for charter schools and other reforms that have been opposed by teachers unions. The United Federation of Teachers, New York City’s main teachers union, has been critical of Petry’s involvement, noting his hedge fund career.

Success Academy, which runs a series of charter schools across New York, has been long at odds with the teachers unions. The charter school network’s president, Eva Moskowitz, a former Democratic city councilwoman, has emerged as the primary face of charter schools in New York and has long drawn the ire of union leaders in the city.

KNEA spokesman Marcus Baltzell declined to comment specifically on Orman’s fundraiser being co-hosted by Petry. Baltzell said that the first he heard of the connection was when he was contacted for comment. He did note that the KNEA opposes charter schools, saying that charters are primarily backing the companies running the schools. But he declined to comment specifically on any connection with Orman.

Baltzell said that decisions about candidate endorsements were made by KNEA’s political action committee following a vetting process.

“I am confident that our leadership groups went through their process and vetted the candidates and make sure they are committed to public education platforms we are committed to,” Baltzell told The Celock Report. “I wouldn’t have comment on what you are specifically talking about.”

On the issues page of his website, Orman does not address charter schools and notes that education is primarily a state issue but also cites a role for the federal government.

“While public education is primarily a state-based issue, there can be a national voice in encouraging innovation and high achievement for every child,” Orman’s site reads. “We need to find ways to improve the quality of education available during a child’s formative years so that they’re prepared later in life to take advantage of every opportunity to achieve the American Dream. At the same time, we must get spending under control so that we will be able to make these investments.”